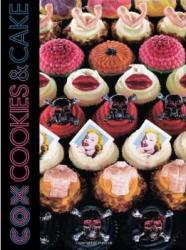 Anyone who has ever ventured into Cox Cookies & Cake shop in, where else but, London’s Soho will have marveled at the creativity on display there, with beauty and bestiality equally on offer.

With a foreword by Sir Elton John and David Furnish, this book was never going to be anything but high camp but the cakes also speak for themselves.

Wondrous cupcakes such as Mexican Chocolate Cupcakes with a chilli-flavoured frosting. Summer Flower Cupcakes and Orange and White Chocolate Chip Cookies are just some of the 75 recipes, on glossy black backgrounds, created by Eric Lanlard and designer Patrick Cox.

Eric is no faker baker, he is twice winner of the Continental Patissier of the Year at The British Baking Awards and once ran the patisserie business for Michel and Albert Roux. He now cooks for prestigious private clients. He also pops up a lot on TV. 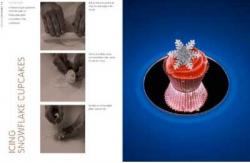 Patrick was himself a shoe designer of some repute, so between them they have all the skills they need to make girls go gaga at the mention of their names, and their shop is a destination for drama queens of both sexes.

The recipes are very ‘do-able’, with no need for fancy equipment or specialised ingredients, just a willingness to get stuck in. Yes you probably won’t achieve the brilliant perfection shown in the lovely photos, but you will definitely have a lot of fun trying.

And as anyone who has ever baked knows, it doesn’t matter if it doesn’t look great it can still and will taste absolutely fabulous darling.