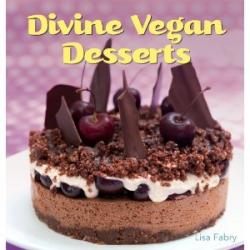 Vegetarians eh? Blooming nuisances that they are, always checking you haven’t used non veggie stock in their soup or slipped some gelatine in their jelly. If there’s one thing worse than a veggie round for dinner though, it has to be a vegan. They won’t eat anything that isn’t 100% made of plants.

That’s just about okay when it comes to the main course, but desserts are another matter. It seems that every dessert contains egg, or cream or cheese so the vegans always get left with a bowl of nuts and a sense of smouldering resentment that causes them to renew their subscription to the New Statesman.

And yet it seems you can make vegan desserts, in fact you must be able to as this opus is proudly labelled Divine Vegan Desserts and it’s not a pamphlet either, but a full book.

Apparently there are at least 200,000 vegans in the UK and not all of them live in North London. Some say there may in fact be as many as 2 million and that undeniable barometer of food trends, the supermarket shelf, reveals more and more items being stocked to meet the vegan demand.

So here’s a book with a potential 2 million readers and maybe many non-vegans too because when you cut out cream and cheese you get a dessert that isn’t laden with calorie guilt. Who doesn’t want a bit of that? Especially after Christmas.Every recipe in the book is completely free of saturated fat and many are also gluten free and nut free too, because as we all know nuts can be very nasty for those intolerant to them. They swell into John Prescott. And die.

All in all it’s one of those cookbooks that promise perfection and offer a fair bit of divine inspiration along the way.