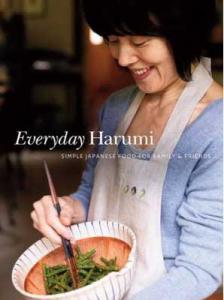 The manageress at one of London’s finest Japanese restaurants, if not the finest, told me that when Harumi Kurihara came to eat there one day the hardened, perfectionist uber chefs in the kitchen queued up to be presented. She is Japan’s most popular cookery writer and most of the staff had got the chef bug from reading Harumi’s books when they were younger.

She herself is now 62 years old and shows no sign of retiring or even slowing down. Over 20 million copies of her books and lifestyle magazines have been sold and this new one should add to that figure considerably. She even has 60 retail outlets and cafes in Japan selling her own branded cookware, so comparisons with our own beloved Delia don’t even come close. You could call her a Japanese Martha Stewart, although Harumi hasn’t been in jail herself.

What makes her cookbooks so successful, both in Japan and outside, is the way she can create classic Japanese meals without the fuss and bother normally associated. For the Japanese wife this means being able to feed the family while having a life outside the kitchen. Often in her recipes Harumi will refer to her own husband’s likes and dislikes, as well as point out that such and such a dish is ‘popular with men’. You get to feel who wears the trousers in traditional Japanese households even in 2009.

Of course Harumi comes from traditional age in Japan, the 1940s, and that is important to her. These homestyle recipes use classic ingredients that always form a staple part of Japanese storecupboards and are relatively easy to buy here too. Japanese rice, Japanese Saki, mirin, instant dashi stock, dried seaweed and others. The first chapter gives you your shopping list and nothing is perishable within twelve or more months. From here comes a chapter on basic Japanese sauces, easy to make and easy to keep, before going on to chapters based on ingredients and not the standard, starters, mains, dessert structure of a Western cookbook.

From the beef for example, comes a steak in a miso marinade -as easy as cooking any steak, but far more interesting. Chicken features Yakitori, those delectable skewers that are as easy as satay, as well as mini chicken fillets with mayonnaise. Pork has one of those famous men-pleasers; a dish of pork steaks in breadcrumbs deep fried and served with shredded cabbage plus mustard and Tonkatsu sauce (a little like Worcestershire sauce although I’d like to hear a Japanese man pronounce that!). Also deep fried are scallops with mozzarella which sound very more-ish.

Rice dishes there are in a plenty, such as Rice with fresh ginger and Onigiri rice balls with minced chicken. Noodles too unsurprisingly have a big chapter – Fried noodles with pork and cabbages and Hot noodle soup with sliced duck stand out. Then there are sections on Tofu, sesame and all the major vegetables, all simple and easy to make. Fish too with a dish of Halibut and aubergine miso gratin which is enticing.

There are over 60 recipes, most with tasty photographs by the ubiquitous Jason Lowe, who must never leave his studio these days he’s so busy. All have that unique Japanese style and all are designed to be healthy, even the fried ones which, Harumi points out, are perfectly fine if not eaten every day. Nice to see some realism like that instead of health fascism.

There is a whole world of new tastes and textures to explore in Japanese cooking and this book will show you how to simply get started and totally get hooked.