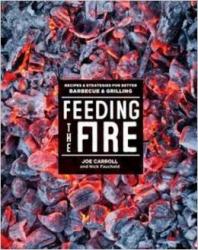 It is a clichÃƒÂ© that men love cooking over naked flame, the BBQ brings out some primal beast even if it’s a gas barbecue (which aren’t so bad actually, see our review of the Leisuregrow 100 BBQ). Make it a proper charcoal BBQ and the men queue up to prod the meat.

It’s also a clichÃƒÂ© that Americans BBQ best, although personally I love the’over the coals’ cooking of the Basque country which is less gross than some of the stuff American BBQ’ ers turn out. Of course what we tend to call BBQ in the UK is what Americans refer to as grilling and there is a big difference. BBQ in America tends to mean low and slow, not rapid incineration with the centre of the meat still raw, as we all too often practice over here.

Feeding the Fire is by Joe Carroll, a chef known well in Brooklyn, New York for his barbecue and grilled meat restaurants Fette Sau and St Anselm and in this book he shares the knowledge he has accumulated over twenty straightforward lessons and ninety recipes that delve deeper into the magical science of the interaction of smoke, fire and ingredients. Rookie or fire afficianado, this will up your game,

Of course there are recipes for Pulled Pork, Burnt Ends and other classics of the pop up restaurant, but also more taste-bud challenging recipes such as Grilled Mackerel with Green Peppercorn Sauce and Charred Broccoli with Pecorino and Lemon.

He makes the point that wood is a vital ingredient, not a mere heat source. Anyone who has used cheap briquettes and discovered how the food gets tainted by chemical smells will heartily agree. He also makes the very valid point about leaving meat on the bone for better flavour.

The techniques are worth absorbing; there is an art to grilling fish, not one that’s hard to learn but vital to avoid disaster.

The secondary title of Feeding The Fire is Recipes and Strategies for Better Barbecue and Grilling and the book does what is says on the cover. If I have one complaint it’s that the temperatures are only in Fahrenheit, something I can no longer think in and which my invaluable Thermapen does not do. Centigrade in brackets would have been very useful.

Otherwise this one goes happily on my special shelf in the shed, ready to be whipped out whenever I feel like sparking up.