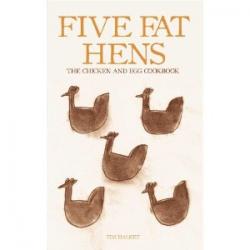 Go to work on an egg. As an advertising slogan that’s one of the most memorable. These days it seems we go to the office on nothing at all and instead spend the first half hour, when we should be working, slurping up filthy cereals instead. Disgusting I call it.

I like a boiled egg for my breakfast, with soldiers, and each soldier must have a good dab of chilled butter on it. The egg needs to be salted in between each dip. That’s proper fuel for the day.

Tim Halket shares my love of a decent boiled egg and goes further, he likes chickens too. Not to buy from the supermarket but to rear in a hen house at the end of his garden. This book is all about his efforts to be a self-supporting egg man, a year in the life of a man trying to juggle food, family and chickens. You won’t see that kind of act in the circus.

And it’s also a very good recipe book for chickens and eggs too, with ideas that make the mouth water in their timelessness. There’s even Tim’s take on achieving that perfect boiled egg, a culinary trick harder to pull off than people think. The disappointment of tapping into a boiled egg only too find it either undercooked and snotty or overcooked and hard as nails is something that can spoil a Sunday all too easily.

It’s refreshing to read a cookbook that isn’t just recipes. Tim manages to do it without the preening of a Nigel Slater or the matrician language of an Elizabeth David. This is a book you can actually read because Tim really can write very well indeed. Touches of Bryson-ish humour are everywhere and he doesn’t take himself seriously, the mark of any good writer. He even knows what an Oxford comma is and how it’s used, I bet Nigey doesn’t know that.

As the year progresses and chickens escape or commit suicide, Tim chronicles his efforts and offers recipes to suit the seasons. He is honest about his likes and dislikes, he loves Heinz Salad Cream as any real foodie does and is suspicious of cheffy menus where sausage and mash is written up to sound like a work of edible art. He’s down to earth. He likes food honestly and without pretension or train-spotter neuroses. Best of all he doesn’t tell you what to like, he just tells you what he likes. Take it or leave it.

I’ll take it. This is a lovely book to read and cook from. As good to dip into on the commute to and from work as it is to use in the kitchen. So many cookbooks appear every week by people who are just after your money. Tim is after your soul or at the very least your yolk.