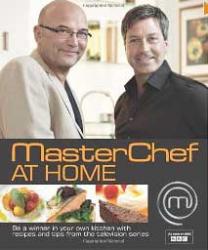 The nation is hooked on MasterChef. When the 2011 series started people on Twitter were actually debating whether they liked the new format or not. Actually debating during the broadcast! That’s indicative of some kind of obsession verging on weirdness.

Personally I miss Lloyd Grossman, who was running the MasterChef kitchen when the majority of Twatters were in nappies. The twisted vowels, the rather odd people who applied to be on and the palpable non-tension of the studio setting were all rather charming.

Back then of course the contestants were all a bit amateurish in the best British tradition. No one declared they had a ‘passion’ for cooking, it was simply something they enjoyed doing. Today the contestants all tend to have a manic gleam in their eyes and the kind of intense focus that makes people edge away from them on crowded trains. You feel that if they don’t succeed in making it to the final they may well be headline news anyway after having run amok with a cleaver in Chesterfield.

Torode and Wallace are still in charge, these days giving less of an impression that they recorded their segments on different days and in different places, but this is the book from 2010. There are 200 recipes in all, starters, mains and desserts, mostly the ones that made it through the various heats. Some are by amateurs and some are by celebs and all are pretty tempting. Here they get photography that brings out the beauty you may have missed when watching on TV.

The diversity is impressive and they are all achievable, such as MasterChef Champion Dhruv Baker’s spiced fish and chips and Lisa Faulkner’s Almond Panna Cotta. In fact open the book anywhere and you feel an overpowering urge to get the pots and pans out.

The UK’s multi culti nature is reflected in the dishes, with all kinds of influences appearing, from Italian to Indian, from French to Jamaican. There are dinner party fancy dishes and dishes that just sound good to eat dressed only in your pants.

There are also dishes from Torode and Roux that show how the big boys cook plus MasterClass panels of very useful info. In all, like all previous MasterChef books this passes the usability test as well as being a great source of inspiration on those ‘what shall we cook tonight’ days. Roll on 2011.