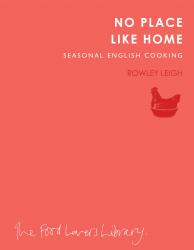 I’m not saying most chefs are thick, far from it, but many are hard pressed to grunt more than ‘seasonal’ and ‘local’ when pressed into conversation.

Not so Rowley Leigh who is as erudite as his name suggests, indeed he’s not just a chef he’s an Oxbridge graduate and there aren’t many chefs you can say that about, reform school often being their alma mater.

First published in 2001, and with illustrations sadly missing from the re-issue by Clearview Books as part of their Food Lovers Library, this is the kind of cookbook real foodies love. Although Leigh’s literary style is sometimes reminiscent of an ageing 19th Century Earl dictating his memoirs, it does have the definite merit not patronising its readers and not being a trendy gush or a tedious TV tie in. Leigh is in the mould of Elizabeth Luard and that whole generation of upper middle class post-war food writers whose books have become classics in the better sort of households.

So no illustrations, just great recipes and a seasoning of skill and vast experience. Most people know Leigh as the chef/owner of the popular Le Cafe Anglais but before that he was the toast of 90’s London with Kensington Place. It’s given him plenty to chew on.

Split into four chapters by the seasons Leigh makes it extra interesting by suggesting meals for occasions – ‘club dinner for a rich uncle’ or ‘ the vegetarian in Lent’ and other witty ideas. That amusing gimmick is the only one however; the recipes are excellent and engaging. What’s more they are ‘do-able’. Not all are British though, despite the name, not unless we have always eaten polenta in the UK.

In between recipes Leigh engagingly and amusingly ponders such subjects as barbequing, and why men insist on doing it, the importance of fish on the bone, the waste that is cooking with wine and why on earth people bother to make fresh pasta.

Slightly cheaply printed, and with the odd typo creeping in, this is not a book for the coffee table. Instead, petit, precise and packed with sensible classics it’s a book the true home chef can turn to again and again for reliable recipes that will always hit the taste spot.

Part of THE FOOD LOVERS LIBRARY