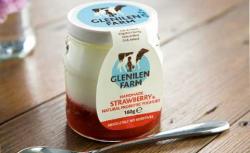 A lot of food brands these days like to advertise with the slogan ‘XYZ the way it used to taste’, but is that really such a recommendation? After all we don’t actually know how it used to taste, and was it such a good taste anyway? It could have been quite horrible, back then people would eat almost anything.

Even if we assume that it used to taste better than it does today, how do we compare? Go to an old peoples’ home and encourage the pensioners, in their various stages of mental health, to try the product? Okay Gloria says it tastes just like it did when she was a girl, but she also reckons the doctors are out to kill her, the next bed has a gorilla in it and she’s forgotten a lot already, including apparently, to put on her clothes.

So as slogans go it’s a bit suspect because in any case tastes change. What delighted Henry VIII at table could well revolt a modern chap with a more enlightened attitude to food, as well as to divorce.

Glenilen Farm have now brought out yoghurt ‘the way it used to taste’ and they sent us that and some other dairy goodness to sample. Now those of us of a certain age can agree that yoghurt has indeed changed. Not so long ago it was barely visible on a supermarket shelf and its sour taste made if strictly for grownups only. Then Ski came along with their sneaky added fruit, and quite possibly added sweeteners, and sales jumped, Now the yoghurt section of any supermarket is really rather substantial.

Glenilen, based in Ireland, use their own cows for the milk and have grown in 14 years to be a big player over there, whilst still retaining the image of a small brand run from a small farm. No easy trick that.

Their yoghurts are apparently preservative free, creamy and with all the natural probiotics we’re told we need these days to stop our stomachs carrying out embarrassing conversations with us at bus stops, Unless TV ads are wrong, and what kind of crazy world would that be?

Well we don’t quite know if this is how yoghurts used to taste, but they tasted very fine but still without the sharpness we used to like. Rasberry, strawberry and plum flavours were all well received and the glass jars will come in useful as water pots for junior artists.

Their handmade lemon cheesecake was not such a success. The base was all individual crumbs that hadn’t combined properly so making it all but impossible to slice up, The cheesecake didn’t have a cheesecake ‘tang’ and the lemon was too subtle. All a bit bland really

The Clotted Cream was great though, pretty hard to make bad clotted cream really. We did the decent thing and spooned it onto scones from the corner shop with homemade blackcurrant jam. Delicious.

And finally their traditional butter. This once out of its cutesy hand wrapped pack was a brilliant yellow against the ordinary shop bought stuff and had a texture that spoke of nothing but sweet cream and no nasties. Very good, as indeed it needs to be at £2.99 for 250g.

So as it ‘used to taste’ or not? Who cares, the question is, ‘worth the money?’ Apart from the cheesecake we’d say yes, although all the products do fall into the luxury market. If you’re accustomed to paying more for better, and can afford it, then Glenilen are definitely worth a try.