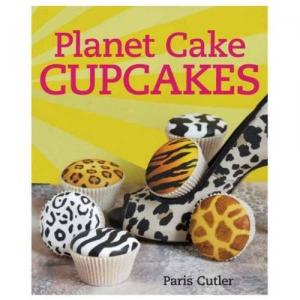 Paris Cutler, sugar-crafter and baker extraordinaire is the first to admit that the cupcake craze has been around for a while. Paris, owner of Planet Cake, an agency that creates cakes for the likes of Nicole Kidman, Rhianna and Celine Dion, was originally skeptical about the whole cupcake phenomena. I tend to agree, a fat slice trumps the mini cake every time! However, it seems that Paris has managed to have her cake and eat it, in this inspiring book she shows us cake mortals how to create some truly magical morsels.

From entire galaxies to endangered animals, Paris Cutler creates, within Planet Cake Cupcakes a whole new perspective on cupcake mania. Gone are the piped twirls that, lets face it, look like something destined for a poop-a-scoop. Instead she shows how to craft sugar into stunningly realistic objects with step by steps that may not be easy, but are definitely follow-able.

Fairies tea parties, aliens and a veggie patch are all themes that Paris Cutler explores within Planet Cake Cupcakes. Each project giving you the necessary skills to go on to create scenes and objects of your own, to work into cupcakes and big ones too. The tips and tricks reveal not only how to achieve cake decorating mastery, but also why Paris Cutler’s cakes are such an international success. Time to don the apron and get baking….