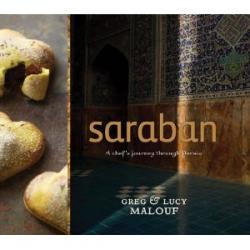 Iran is perhaps a place the majority of us will never visit. Vietnam, Thailand, Malaysia being unthreatening and easily  accessible from the UK and so forming the basis of most food tourists’ itineraries.

Iran though is a different matter. With its government something of a mystery and its reputation less than perfect, it’s somewhere a Westerner can feel safe worrying about going to. It’s not the fault of its people of course who, in the Middle Eastern manner, are friendly to travellers and welcoming to guests, but the people in charge.

The authors were equally aware of this, as they say in their introduction,’It often seemed (before we went) that the’real’ country – whatever that might be – had dissolved like day into night after the 1979 revolution. For months before our departure people had been asking us’why Iran?’

It was of course the lure of the food. Already respected authors of Middle Eastern cookbooks, the Maloufs saw Persian food as the final key to the cuisine of the area. Food unlocks cultures, brings people together like a common language and often begins and then bedrocks friendships. For them it was to be an eye-opening trip both in taste and experience.

A saraban is a caravan, in the Middle Eastern sense and not the road-blocking Cornish sense. The Maloufs travelled Iran stopping where whim and flavour took them. They collected stories, ingredients and of course recipes, the real recipes of Iran from all its corners. The country is 3000 km long and takes in high desert plateaux, mountain ranges and extremes of temperature and the cuisine reflects this. On the fertile plateaux much grows while in the mountains snow and ice restrict the choice.

And of course there are always the spices, trade from all around has always swelled Iran’s larder and rice is ever present.

The Maloufs recorded recipes from many regions, beside chapters of pure and evocative travel writing, as well as vital and intriguing guides to Persian table and food etiquette. Sections cover rice and bread, small dishes, soups and stews, grills, roasts, sweets and preserves all with one eye on what ingredients the UK cook can reasonably be expected to find locally or, of course, on line.

The result is a sumptuous book, a real feast for the senses with wonderful food photography, people and places and recipes that make you sigh with longing. One day perhaps we can all take a caravan to Iran and discover the food for ourselves, until then this book will do very nicely.