Ooh I do like a fuggy kitchen on a cold day, with all those lovely cooking smells wafting about like the Christmas Fairy. 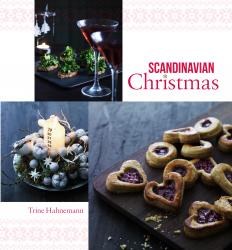 Especially these Scandi bakes with their liberal use of cardamom. In fact, Scandinavia is the only area outside of the Indian sub-continent with a real abiding love for the majestic spice. Despite being British, though, my own majestic love for it knows no bounds- nor does my love for baked goods. So those smells are about the only things that are going to resemble the Fairy this Christmas.

That’s not to detract from the flavours in Hahnemann’s food. Not a bit of it- her spirited use of grains, pulses and wild fruits add nuance and grit to recipes like thin oat cookies and dark choc-dipped honey hearts  which, with a more’white bread’ approach, could come off tasting one-dimensional and unsatisfying. That’s simply not the sort of criticism you can level at Trina’s sourdough rye, even if you’re the sort whose taste is soured somewhat by the notion your guilty grub’s doing you some good.

Outside of the bakery, Trine focuses on pantry gifts of chutneys and preserves, and describes traditional Scandinavian family festive customs and the foods attached to them. For Advent there’s donut-like apple aebleskiver, and the big Christmas Eve dinner would simply not be complete without caramel potatoes. She’s not averse to a celebratory bevy, either- knocking a pretty poky Glogg extract, a vat of which would surely go down a treat at any gathering alongside a tasty elderberry and rum toddy.

Hahnemann’s struck a nice balance with’Scandinavian Christmas‘, producing a work that’s informative without being worthy, which includes recipes you might actually cook, and even works in a little lifestyle advice without coming across as preachy. But for all that, she’s not going to convince me to lay off her spiced Christmas Danish pastries. Come midnight, you’ll find me a la Nigella, arse hanging out of the fridge, munching away, leaving a trail of crumbs to rival Santa’s after a long night on the sherry.