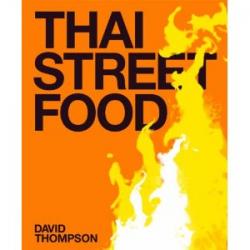 It seems to be the season for big books. No sooner had we emerged from traction after hefting The Wine Opus up the office stairs than Thai Street Food by David Thompson hove into view like the swollen snout of a super tanker.

You could call it a coffee table book, although it’s liable to overlap most coffee tables and sorely test the strength in their legs too. It’s not a cookbook either, because although full of remarkable recipes it’s not going to sit comfortably in that Cookbook Holder you got from John Lewis.

You have to wonder what and who the book is aimed at, if you can use such a verb when the consequences of being hit by it would be a trip to A&E. For the typical home cook, many of the recipes will be difficult if not impossible.

The street cook in Thailand has many advantages over the kitchen cook at home, not least super-fresh ingredients, some of which you won’t easily find over here unless you live in London, and not always then. My Thai friends who live out of town despair of getting fresh pea aubergines for example. The agony eh?

It is a book to make your tummy rumble though but one advantage of cooking street food at home is that gastric upsets are less likely. Street food is delicious, but it can also be a form of Russian roulette when the vendor is more used to serving locals with stronger stomachs that softy Westerners. Many a traaahveller has come to gastric grief from street food, me included.

Marvellous pictures of Thai life abound throughout the book albeit in the muddy colours that seem to be the default these digital days. It’s as if pro photographers, having spotted that anyone with enough money to spare can shove a top end digital camera at a subject and get an acceptable picture, are trying to reclaim their artistic ground by going for a more retro look.

David Thomas is something of a legend in his native Australia and a few years back he cooked at Namh in London earning them a Michelin star. He knows his Thai and that’s for sure.

Using three chapters – morning, noon and night – Thomas takes you through what the average Thai is tasting and it’s a hell of a lot. Thais seem to eat nonstop. His commentary and explanation is illuminating and his guide to basic prep and cooking technique very useful. There’s barely a dish in the book that I wouldn’t snap up if it was available in my street. Reading it is a trial beause it is all so tempting and delicious. There are dishes here you will never had heard of, but each is something special.

There’s no doubt this is a definitive guide to a wonderful cuisine. It’s physical size makes it a little impractical, but as a source of recipe material it’s peerless. No doubt a normal sized paperback version will be on sale soon. A great gift for the dedicated Thai foodie be they living on streets or on avenues.