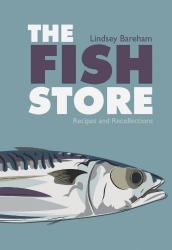 Cookbooks without photos on every page are not the norm these days. Publishing best practice reckons that customers today are more likely to be seduced by good photos than they are by good writing.

And judging by the most recent cookbooks to cross our desk that does seem to be the case. If the writers of these had spent half as much time arranging their sentences as they did their hair for the photos then a better book would have resulted every time. The Fish Store has no more than eight pictures of food; it’s all about the writing.

That’s because Lindsey Bareham is more old school, from a generation of food writers who did it because there was no particular pressing necessity to earn serious money and most 9-5 jobs were seen as rather common. One didn’t’work’ if one didn’t really have to and so food writing was a good thing to do with its agreeable hours, mostly performed at home in front of the Aga. And they had the education to be able to write well and easily.

Bareham married into the family of Augustus John, legendary drinker, artist and pork swordsman, and so came to spend much of her time in a John family home in Mousehole in Cornwall in a converted pilchard factory there, the eponymous Fish Store. As a result this book is part memoir, part recipe book. Originally, she says, it was intended as a private recipe record for her son, but you can’t help feeling she always cannily knew it was going to be more than that.

The memoir is charming, a fluid and captivating recollection of living in a place, and for the most part at a time, that seems idyllic. Bareham recalls how the locals would donate fish and call out respectful greetings to the family using their own local patois, one that’s probably disappeared as the locals are now more likely to be weekending West Londoners than genuine West Country characters.

And while we can enjoy the memoir we can also warm to the many, many recipes. Bareham had written several books before this, a total of fifteen now exist, as well as working as restaurant editor for Time Out magazine in London. The latter, for those too young to remember, was once required reading in artistic liberal London middle class homes thanks to its touching fondness for embracing any rubbishy work of art as long the creator was saying the right things about South Africa, but which now seems to have disappeared.

Bareham’s recipes are as attractive as her writing and are not just fish; Malaysian Chicken Rendang, Portugese Cabbage Soup with Rosemary Bruschetta, Spiced Aubergine salad with cumin for example, and there is a large section on fruit and desserts. Bareham is happy to acknowledge that many recipes are reworkings of classics, or other people’s recipes, and there’s nothing wrong with that. The art of good food writing is as much as in identifying existing good recipes as in coming up with brand new ones. All that matters is that here is a book with a wide range and one which can supply a meal idea for any day, meals that don’t need photos to sell themselves any more than a good restaurant review needs a picture of the dishes.

The first edition of Fish Store was published in 2006, not so long ago in years but in a different food world. Then it wasn’t always easy to get a book contract, even with the right contacts. One had to be good. Today it seems any blogger with a minimal grasp of cooking, but a few thousand followers, can blag a book deal from publishers increasingly grabbing wildly at passing trends in a landscape no longer comfortably mapped out for them.

The book’s republishing now in paperback, after some years out of print, is hopefully not an act of doomed bravery by Grubstreet but a timely push back against the tide of food writing rubbish that threatens to engulf us all, even in our Sunday papers. If you don’t already own a copy, now’s your chance to rectify that omission.

Why not try these sample recipes?