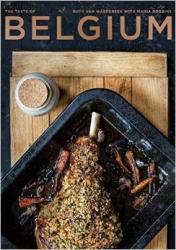 Obviously there will be jokes. A Belgian cookbook? What comes after the chapter on chips, mussels and mayonnaise? Well actually quite a lot.

Belgium is two countries in one, in the capital Brussels it’s not unusual to see each advertising poster twice, a Flemish and French version side by side. We think we strive for unnecessary political correctness? We’ve a long way to go to beat Brussels. But then it is the home of the EEC.

There are apparently more three-star restaurants per capita than any other nation, any connection between that and the presence of MEPs with expense accounts is of course purely coincidental. The surveys don’t say how many of those restaurants serve Belgian food however.

But it certainly exists, if not in the top restaurants then in many if not most homes. Ruth Van Waerebeek was born and raised in Ghent and learnt to cook from her mother, grandmother and great grandmother. She’s been a restaurant chef in Belgium and now lives and works in Chile and New York. Belgium gets its cuisine influences from its neighbours, French foundations, hearty foods from Germany and Holland, herbs that go back centuries. It’s bourgeois cooking, filling and no nonsense. 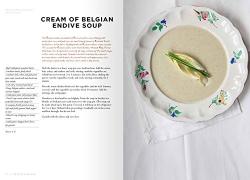 Many dishes are slow cooked in beer, Belgian beer of course and ideal for cold and wet climates. You can set the pot on the stove and come home to heaven.

The book was first published in 1996 as Everybody Eats Well In Belgium, a title Ruth seems to have had second thoughts about, but on the face of it that’s not that contentious statement. Waffles and croquettes of prawn are I know from experience, delicious the small brown shrimps just one of the delicious things abounding in the sea around the Belgian coastline.

In many ways Belgian cuisine is the cuisine we Brits perhaps could have had; we have much the same climate after, all. This food is good for northern climates and northern agriculture and doesn’t need airmiles to get the ingredients to us.

Ruth is an engaging writer, plenty of stories and reminiscences pepper the text. If I have one complaint it is that the font used for the recipe intros is a poor choice and very hard to easily read,

Bask in Belgian goodness, a cuisine that really deserves to be better known. And yes there is a recipe for chips because nothing beats Belgian chips eaten in the street.