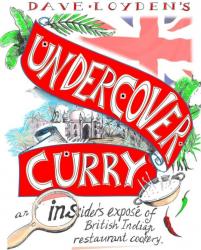 These days, Indian cuisine is probably more popular than it has ever been, but with money getting tighter, more people are trying to cook Indian food at home, rather than eating out or taking away. And of course, there’s a glut of recipe books out there, but looking at some of them, they seem to make it overly complicated and have a lot of ingredients, which to me, defeats the object. And very few of them, if any, recreate the flavours of the dishes from the local Indian, which surely is what most of us want.

But a new book, Dave Loyden’s Undercover Curry, aims to change this. The idea behind the book is to enable home cooks to recreate the flavours and dishes that they would get from their local restaurants and takeaways, or as the book calls them, British Indian Restaurants (BIRs, if you will). As preparation for writing Undercover Curry, Loyden spent three years working in a BIR, but the title isn’t strictly accurate, as he openly used his contacts in the trade to gain a greater understanding of the subject – this isn’t an exposé, it’s about sharing knowledge and techniques.

Undercover Curry is split into sections, as you’d expect, but a lot of space and time is given over to background, preparation and techniques. Unlike other cookery books, this isn’t designed to be one where you can just plunge into the middle, and pick out a recipe you like the sound of – Loyden is clear that mastering the basics is the key to future success. That said, the early part of the book still has a wealth of recipes, so it’s not simply a dry account of what to do and how to do it.

Most, if not all of the recipes in Undercover Curry should be familiar to anybody who enjoys Indian cuisine, but unusually for a recipe book, there are no pictures of the preparation steps or the finished product. The aim of the book is to be as functional as possible and in that, they have succeeded. Loyden writes in a conversational way, which I found appealing, and he encourages the reader to adjust recipes if they wish to. As well as the recipes themselves, there are numerous hints and tips, together with plenty of space for notes, so in time, it will become the owner’s personal guide to replicating BIR dishes.

Undercover Curry also has a recommended menu for six, some thoughts about curry for children, details of the typical BIR kitchen and Loyden’s thoughts on curry and health. Overall, this is a thoroughly researched, informative and – most importantly – useful book for anybody with an interest in curry and the desire to re-create the flavours from their favourite restaurant in their own home.

For more information about Undercover Curry go to: www.undercovercurry.com