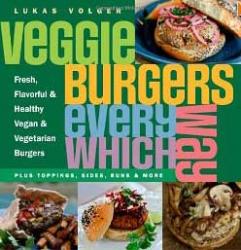 People have been putting things into bread-type products for centuries, long before the Americans decided to shorten lives by eating pounds of minced meat in a stupidly big bun. The flatbreads of the Middle East for example, or the rotis and parathas of India. The sandwiches of England even.

It’s all these world recipes that Volger has collected, as well as some he’s tweaked or reinvented, and placed between the toasted halves of this book. They’re only actually burgers if you put them in a burger bun and, to be honest, most of the time they’d be better off in their original wrappings, but that’s a decision you can make for yourself. So let’s put ‘burgers’ in quotation marks for now.

The important thing is that these are all good recipes, packed with flavour and light on the stomach. Sweetcorn ‘burgers’ with sun dried tomatoes and goat’s cheese, Chipotle Chilli black bean ‘burgers’, red lentil and celeriac ‘burgers’, Sweet potato ‘burgers’ with lentils and kale and of course falafel ‘burgers’.

If you must use buns, then why not make your own? Volger has the recipe and offers vegan versions that avoid egg and milk. In fact at least half the recipes are vegan and/or gluten free. Fries are on the menu too; baked and fried, as well as Swede fries which sound intriguing, and condiments, sides and sauces which are actually healthy – roasted sweetcorn salad, pomegranate-sesame sauce and a mango BBQ sauce for example.

Tofu makes an appearance in Tofu and Chard burgers and a mysterious thing called Seitan – often called mock duck in the east and which Buddhists swear by, or whatever Buddhists do when they like something a lot.

This really is book of ideas and flavour and shows how meat free can fun. Gather your vegetarians around the BBQ and surprise them with something that doesn’t taste like a hippy’s sock. You may even abandon the heart-stopping excess of a meat burger yourself once you get a taste.