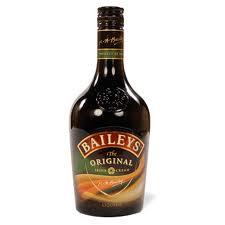 Ahh the Baileys Irish Cream. The sweet stuff so it is, easy to drink and easy to regret the next morning. Let a small child get a taste of it and ten years later you’ve got a teenager with acne, bad teeth and a drink problem.

Bailey’s is so moreish it could lead a nun into sin, but of course the company is stern about people ‘drinking responsibly’ and would never condone abuse of the Devil’s cream. Instead they are all about sophisticated drinking, with the Bailey’s poured over ice and sipped by temptresses in low cut black dresses and enigmatic smiles.

Of course Baileys really know their main market is Xmas, much as they would like to move it on into all year drinking. Somehow the British psyche associates Baileys with Xmas as much as it does Warninks Avocaat and Stone’s Ginger Wine, drinks my parents would put out on the sideboard every year for the 18 years I lived at home. I rather think they were the same bottles, no one ever actually drunk the stuff.

They ring the changes do Baileys, adding flavours to extend their drinking season. The milk for the cream comes from their own farm; the whiskey is of course Irish. As well as the original there’s now a mix of add-on flavours – a hint of mint chocolate, a coffee flavoured Baileys, one with Caramel and now there’s new Hazelnut which we tried.

It’s rather good actually, the nuttiness works well and it would be excellent for what Baileys have cannily recognised as a different market for their cream – chefs.

Baileys can be poured over something as simple as vanilla ice cream to lift a dessert up and it can be made into truffles as Theo Randall demonstrates with the recipe below. And of course the list of cocktails that Baileys can be a part of is enormous.

At this time of year a bottle of Baileys is a must have in the drinks cupboard, or if you’re like me, in a box under the stairs. Warming and familarb and now rather nutty too.

Easy to make and even easier to
devour, these Baileys Chocolate
Truffles are just the thing to share with friends

How to make it

1. Break the chocolate into small lumps. Fill a saucepan with water,place a heatproof bowl inside (large enough so it rests on the rim ofthe pan) and bring it to a simmer.
2. Put the chocolate and butter into the heatproof bowl and melt themboth, slowly. Do not stir, as this can cause lumps.
3. When the chocolate and butter are fully melted, take the saucepan
off the heat and carefully remove the bowl. Whisk in the doublecream and Baileys.
4. Leave to set in the fridge for 2 hours.
5. Using a melon-baller, start scooping out the truffles – they shouldform the shape of a ball.
6. Place truffles on a plate and leave to cool down in the fridge for half an hour.
7. When you’re ready to serve, melt a further 250g of 66% chocolatein the same way as before, dip each truffle into the melted chocolate and then roll in cocoa powder.