So an invitation to sample a proper martini, made in the glamorous bar of the Connaught Hotel just a sniff away from the Michelin star kitchen of Helene Darroze, is not to be turned down. The sponsor is Ketel One Vodka and their ‘Brand Ambassador’ first explains that my assumption that Vodka is Russian is somewhat wide of the mark; they may have invented the drink but the Dutch made it what it is today. This comes as a surprise to someone who thought the main Dutch achievement to date was dykes and donkey porn, oh and that peculiar Slo Gin everyone brings back from Amsterdam.

Since 1691 the Nolet family have been making Ketel vodka and the great, great, great great, great, great, great, grandson of the founder is in charge today. Ketel One gets its name from Distilleerkettel No 1 the original alembic copper pot still method that was used all those years ago and is still employed today. The method gives great smoothness and the high quality control process means that the top and bottom of the resultant liquid is discarded leaving only the ‘heart’ which is the best bit of all. It’s a very time consuming, manual process, rather like creating a fine malt whisky or a classy cognac.

Right then, sales pitch over, let’s taste some. The Ambassador pulls a bottle of Dutch Ketel One, a bottle of Danish Absolut and one of a Polish Belvedere out of his bag and pours us out some neat shots. I used to do that in our local when I was 18 but the landlord used to get very shirty about it if he saw us, here it has been sanctioned by the Connaught which is one of Ketel One’s favoured clients. The Ketel One is surprisingly easy to drink neat, the flavour is rounded and it clings to the palate for a long time. It definitely isn’t firewater but a connoisseur’s vodka. The Absolut we all agree has a splendid bottle, in fact I think the bottle is the secret of its success, far more than its taste that is fine as far as it goes. Its bottle on the other hand is now iconic.

The Polish vodka is better than I expected. My bus in from South London has quite a few Polish vodka experts on it in the morning, many enjoying a refreshing drink from a bottle in a brown bag, and their vodka smells pretty appalling and industrial. This has a sharp aroma that stings the nose slightly but otherwise is rather good with a slight peppery vanilla note. Of course not all vodkas are distilled from the same materials. Ketel One uses 100% locally grown wheat, which adds to its unique flavour, while the Belvedere is made from rye. Belvedere is popular with rappers as it is more expensive than most other vodkas and rappers tend to go by price rather than flava (check the jewellery, for example), while the Ketel One on the other hand is more appreciated by people with a bit of taste. Absolut, of course, is popular in the art world thanks to that bottle.

So it’s martini time, and the Connaught brings one out in a classic glass with, yes olives on a stick, which are very important. The martini is nothing more than Ketel One Vodka shaken with ice, no vermouth. It’s a smart drink and I feel all sophisticated and wish I had a fast car waiting outside to whisk me a way to a nightclub where Shaun Connery as Bond would be waiting to make a night of it. Ah well, it’s going to be the 159 bus for me, if I can find it. All this vodka tasting makes one shaken and also a bit stirred.

I can honestly say that the Ketel One was my favourite of the three tasted, its flavour perfect for neat drinking, and as the Connaught also proved, it makes a brilliant Bloody Mary that was so good I think the restaurant should serve it as a soup. The celery foam on top was sublime.

If you’re the sort of person who mixes vodka with Red Bull, then stick to cash n carry vodka, but if you’ve got a bit of taste I recommend you taste some Ketel One. 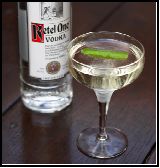 Method
Fill the shaker with ice and stir in the vodka and elderflower cordial.
Stir (not shake) in both directions at least twenty times.
Strain into a chilled martini glass, top with champagne and garnish with lime peel or a string of ruby currants

Ketel One Gingerbread and Espresso Martini

Method
Rim a chilled martini glass with cinnamon and sugar
shake all ingredients together and strain into the glass.
Garnish with the coffee beans