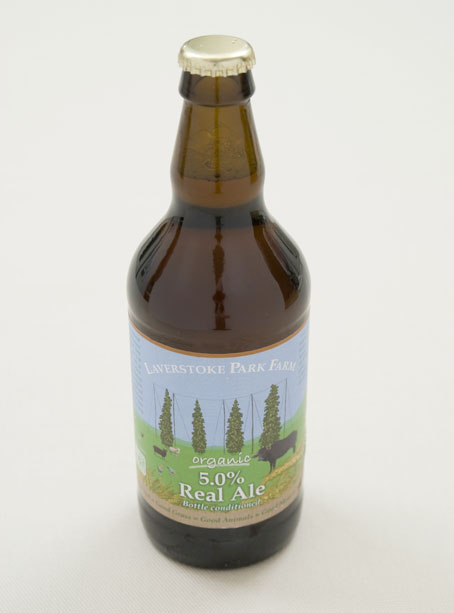 A box of Laverstoke Farm Ale lands with a merry festive clink on the desk, courtesy of Jody Scheckter former 1979 Formula One world champion racing driver who owns and runs this totally organic farm in Hampshire.

His traditional bottle conditioned ale is the latest ‘farm produce” and has been produced by master brewer Derek Lowe utilising the traditional hops and barley grown on the farm.

He has collected and grown old traditional hop varieties and selected the best combination of these for their aroma, and then balanced them with additional organic hops, in this, their first beer. The farm is of course all biodynamic and organic and goes much further than both to produce excellent, flavoursome hops and barley. The micro-biology lab continuously tests the soils, adding compost and compost teas so that the biology in the soil has the right proportions of beneficial bacteria and fungi for the hops and barley to be at their best and most flavoursome. This creates the deep flavours of the beer.

As we sipped it, it’s rather strong at 5%, you could clearly pick up the various depths of taste and enjoy the marvelous ‘length’ of them that meant they hung on the palate a good time. This is a bottle-conditioned beer and that is rather unique these days and this attention to tradition certainly shows. Bottle conditioned means the beer is still fermenting after bottling, with live yeast working away to produce a natural fizz.

Says Jody Scheckter: ‘I started the farm in order to create the best tasting, healthiest, food without compromise for my family and myself. My goal was to be self sustaining in food – now I can be self-sustaining in organic ale as well!”

This is a beer to savour not swig and would undoubtedly go terrifically with good cheeses. It’s available at £1.99 in places like Waitrose but you can win a crate by entering our competition.

Win a crate of Ale