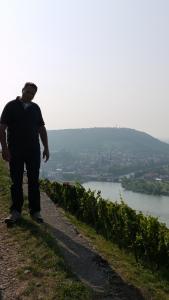 My first memory of riesling producer, Johannes Leitz is of seeing this giant (who looks a little like British wine communicator, Joe Wadsack) coax a mischievous kitten from under a minibus. The second is of his polished, black, 6.2 litre V8 Mercedes jeep. As peasants toiled the sheer, south facing slopes of the Rheingau, we prowled in air conditioned comfort, glancing at higher terraces and the floating chair lift through the frame of the tinted sunroof.

‘Emperor Charlemagne recognised that snow melted here first,’ said Leitz of this green stepped bank as we paused at a picnic site. Well read and very well travelled, Leitz has observed 46 vintages and, most recently with Eva Fricke, crafted wines for the past 25. As others gave up, he recognised the potential in these inclines, increasing hectarage from 2.5 to 40, simultaneously acquiring another winery. ‘Working 280 parcels is real brainwork’ he said.

Under already sultry sun at 9:30am, I wondered, as the earth warms, whether winemaking was growing easier. ‘Before 1978, I never had sunburn,’ he said. ‘Now the seasons change so fast. But yes, since 1988, the climate’s made vintages better, so life is much easier.’ Indeed, of vintage 2009, Leitz asserts ‘it’s the best ever.’

As we paused at Drachenstein, a vineyard named for its fossilised dinosaur prints, Leitz extolled the virtues of its quartz soil (most sites are slate). ‘It dries out the wine,’ he said, adding ‘which makes it crispy’ almost as if tasting the words. 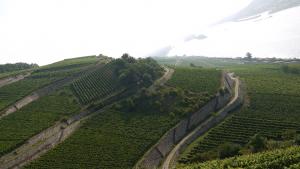 Further along the narrow single track we came to the Schlossberg vineyard, perched on a particularly vertiginous incline overlooking the ruined castle of Ehrenfelz. Here, Leitz pointed out a significant drop in temperature. ‘But the sun strikes later and longer,’ he said. This apparently lends to complexity to the wine. Metres on, he grabbed a stone wall with a big hand. ‘You can read these,’ he said. ‘Here, they used strong stones, built to last by a carpenter, so times were good.’

Leitz laments the way the landscape has changed, whereby a close knit network of walls which effectively slowed soil erosion were replaced by much wider bands to allow mechanisation. But top German riesling is a demanding grape and, along with those growing it, rarely benefits from a rushing mentality. ‘I remember when my dog jumped out of the car straight down there,’ said Leitz, gesturing to an uninterrupted 15ft drop. ‘But fortunately he was fine.’ Less lucky was the impatient tractor driver who, one month ago, tried to accelerate out of a rut. He toppled his vehicle and lost a limb. Others however, have lost their lives.

Noticing fallow patches, I asked Leitz how such superb sites, basking high in the reflection of the busy waterway below could be overlooked. ‘There used to be a saying that where a horse can go, it’s no place for vines. That was before so much wine was made in South Africa, Australia and America…’

Competition is but one of many issues faced by domestic grape growers. But this ancient land of wine has suffered worse blips. In the 17th century a lack of labour arose from the 30 year war, followed by the World Wars and ensuing resistance of export markets. Neither have recessions helped, nor the blanket tarring from overproduction. Compared to such calamities, it is ironic that climate change seems – momentarily – beneficial.

Closer to the Rhine is the tourist town of Rüdesheim where a full plastic road train hectically cut us up before retreating swiftly into an impossibly narrow alley of bars. Leitz paused at a near immaculately tended trio of peaceful enclosed vineyards which he rents, including ninth century iron fenced monopole, Rosengarten (rose garden), next to the first vacuum distillery.

Back at Leitz’s first winery, which discreetly extends beyond (and under) the identity of a house once fringed with fields and now a suburb, we begun the tasting. As I glanced at a cabinet of curios, Leitz gestured to an empty bottle of Vouvray – 1919 Huët le Haut Lieu. ‘I started to cry when I tasted it,’ he said of the majestic icon.

Drawing him back to the tasting table, we started with Leitz’s amusingly titled, entry level diet tonic water and seltzer scented ’09 ‘Einz Zwei Dry’ and eventually made it to his utterly silken, lozenge like ’09 Drachenstein Eiswein. I found such purity and pleasure in all that I tasted that I forgot about the challenges that custodians of Riesling have had to overcome. 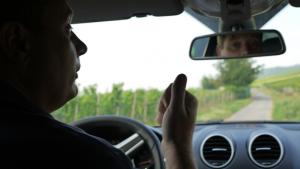 I was particularly fond of the riper styles, such as the later harvested Roseneck Spätlese ’09. From an amphitheatre shaped sun trap, Leitz summed the quartz sewn wine as ‘music for your mouth’. Initially mango scented, and then compellingly strict, it even delivered a spread of umami. Thinking of the perfect food match, Leitz and I both thought of almost immodestly plump scallops. ‘With a hint of curry?’ he said. But I wasn’t so sure. However, judging by his knowledge of restaurants (he loves London’s Cinnamon Club) and hastened into hunger by a recent diet, Leitz is a gastronome. Reaffirming my assertion, he said: ‘I would have been a chef in another life.’

The opulent, powerful, pineapple scented Berg Rottland ’09 also warrants a mention, the blue tinged grey slates of the vineyard having been applied, roughly, on an abstract canvas in the tasting room.

Perhaps it’s stating the obvious, but Leitz’s obsession with riesling is infectious and has won him well known friends. Revealing a dizzy connection, he told how a ’59 Egon Müller Scharzhofberger proved the ‘wine of the day’ during an intimate tasting of bottles pre ’65 with Jerry Yang (founder of Yahoo) at his San Francisco palace.

By now time had evaded us. As with the wines of Dr Loosen, Leitz’s rieslings are increasingly famous in Britain. However, Leitz still strongly laments the fact that more British people don’t drink more German wine generally. ‘Whether it’s because of the war, or football, it still hurts,’ he said.