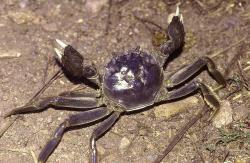 The Swan at Shakespeare’s Globe will be serving Chinese mitten crabs as part of a Thames-inspired menu celebrating London’s most famous river.

With its source in prehistoric times, the life giving Thames at times bustled with as many as 2,000 boats each day, loaded to the gunwales with precious goods and intrepid travellers.

In the 15th century eels, kipper salmon, mullet, lamprey, smelt, sturgeon and ‘white bayte’ were caught in nets baited with cheese and tallow.

In the 17th century the river welcomed merchants who brought riches and exotic tastes from far-flung corners. From the East Indies came tea and china, as well as cotton and pepper; from the West Indies came rum and coffee, sugar and cocoa.

The Thames Menu features a delectable trespasser. Landing in the ballast of ships in the 1930’s, the Chinese mitten crab is a relatively new edition to the river’s ecology. Although classed as a pest because it burrows and destroys riverbanks, it will take pride of place on the Thames Menu as a delicate bisque with roast garlic brioche crouton.

Steinborn will also use spices and exotic fruits to tell the tale of this magnificent river.

Available throughout September in celebration of the Thames Festival, 11th and 12th September