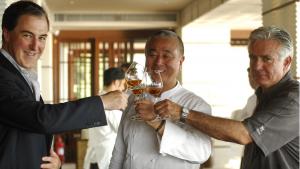 I imagine that the majority of whisky connoisseurs would hardly delight in seeing Johnnie Walker Blue Label blended into submission in a cocktail. The bold but multi-faceted, ‘Cristal’ of the blended whisky world is, after all, an uncompromising ingredient.

However, it was as a fleetingly flared, Pedro Ximénez pepped ‘Iberian Blue’ that ‘King Cocktail’, Dale DeGroff chose to whet delegates appetites before a memorable masterclass at ‘Matsuhisa’, Athens. Overlooking the calm blue baize of the Aegean sea, occasionally scored by speedboats, this is one of the more filmically sited restaurants in Nobuyuki ‘Nobu’ Matsuhisa’s 23 strong chain.

Even though it proved an invigorating tipple, I had come to experience three renditions of the iconic spirit unsullied. Guiding buffs and beginners was Diageo’s debonair brand ambassador, Jonathan Driver, and Nobu himself.

Driver started with a stroll into history. Beyond the slanting label, which mimics those on tea chests (the Walkers being foremost grocers) there looms ‘a smorgasbord of flavours” he said, which offers ‘a sensory window into the 19th century.”

On account of its forceful aromas of brine, coffee, mandarin oil and, from Caol Ila, tobacco smoke, then rose, sandalwood and chocolate bound in the supple palate, Nobu was inspired to design it a dish. He chose sashimi seabass ‘cooked’ with citrus, woven with wisps of onion and a wasabi emulsion. The fish’s delicacy becoming emboldened by salt, wasabi heat and tangy acidity, it tamed the Scotch, proving a refreshing match.

Next, ‘King George V’, which Driver said ‘marks the moment when, in 1934, the Walker family gained a royal warrant, thus fully graduating from grocery to whisky craftsmanship.” A more amplified experience than pure blue, the deeper hued spirit is a ‘slower Scotch for later at night.” Its perfume of Seville orange peel gave way to a smoother, more peaty, more fruit driven palate, which somehow caressed the tongue as it lounged upon it. Perhaps explaining its cost, which nudges £460 a bottle (triple the cost of the ‘standard’ issue blue), it involves single malt from the distillery of Port Ellen, extinct since 1983.

Finally, released from a massively showy, reassuringly heavy Baccarat crystal decanter-like bottle came the ultimate expression. ‘The John Walker’ is entirely drawn from distilleries operating in the 1800s. As he drew out the paperweight like stopper, Driver hushed the room and lowered his whisky voice. ‘This is which is what happens when our master blender [Jim Beveridge] is given carte blanche.” Served, unlike the others, in a slim copita, the soft, vanillin, warm honey scented Scotch had a hint of old wood (rancio), ripe pear and, ever present its epic finish, a sense of freshness. 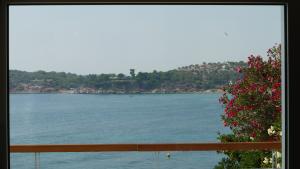 The experiences which I encounter in the racket that is gastronomic journalism still leave my eyes wide, nostrils flared and tongue wagging. It was therefore poignant and surprising to spy barely touched drams left after the more timid journalists rushed to a distant buffet. In their absence, Nobu brought out tray after tray of briskly fresh morsels, including witty salmon Tacos, Edamame and California rolls. In homage to Walker, I took charge, helping myself to a drop more of the $3,000 a bottle Scotch from a flirtatiously glinting glass nearby…