The Great British Chefs app is like a benign but ambitious godparent. It has faith in you, its culinary protégé, and confidence in your cooking abilities. Five courses of cheffy food for a dinner party tomorrow night? Why ever not? In the world of the Great British Chef, there is no such thing as a difficult dish, only a challenging one. 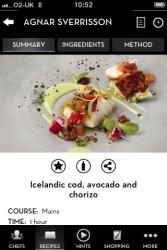 And thankfully this ambition precludes any possible sense of recipes having been dumbed down. After all, to do so would only be patronising to the potential purchasers of the app: those addicted to Great British Menu and those who sit watching early Masterchef stages thinking ‘I could have done that’. The appeal of the app is that its recipes are perfectly pitched to this audience: from the photos, they appear too ambitious for the average home chef but reading the methods is like being told a surprisingly obvious secret.

The app’s interface achieves two of the most sought-after attributes of software: intuitiveness and speed. The black colour scheme is platform-appropriate too, and as sophisticated as the food it presents. I do have to admit though, that after having seen the screen shots for the iPad version, the iPhone one looks a little less impressive but I am the only person to blame for my technology envy.

Its peripheral features are annoyingly comprehensive and demonstrate the loving, parental features of the app once again. A voice control feature releases you from the ordeal of trying to avoid smearing butter across the screen of your phone and an integrated timer in the corner prevents you having to switch apps.

The accompanying hints videos proved to be compulsive watching and the calm but assertive narration voice is strangely hypnotic. Never have I wanted more to remove the beak of an octopus or butcher a rabbit. If a TV channel were to broadcast them, my productivity levels would certainly drop off considerably. 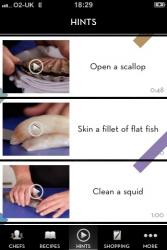 I wanted to find a little niggle, like the absence of coat hangers or an empty soap dispenser in a hotel room, but couldn’t. I thought I might have caught it out with the shopping list feature. Surely it wouldn’t add up the same ingredients from different recipes? But it did. The favourites and notes features should also be able to counter any grumbles about not being able to post-it note and scribble over the recipes.

With this display of consideration, respect and ambition for the user-chef, the cook book and restaurant tie-ins can be forgiven. At only £4.99 for so many recipes by some of the greatest chefs in the country, being sniffy about commercialism would be just silly and unhelpful since, after acquaintance with this app, I’d imagine many amateur chefs will feel enthused to try more these chefs’ recipes.

The ‘About Us’ section promises additions to this intelligent, sophisticated and inspiring app. I look forward to them, and in the mean time I might have to start saving for an iPad.