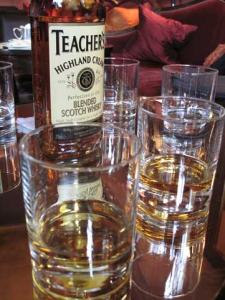 ‘You learn something new every day,’ my dear old dad used to say, normally when some piece of machinery he was fixing fought back and tried to take his eye out. Today I learnt that, contrary to my prejudice, blended whisky can actually be a very nice drink indeed.

Of course it helps when you’re drinking it in the company of the Master Blender himself, ‘I prefer to be just called a blender’, says Robert Hicks modestly. He points out that Teacher’s, the brand he has blended for over 40 years, is uniquely a 45% malt to grain ratio and that as a blender he has access to a whole palette of single malts to choose from, allowing him to be more creative and he uses 33 different malts in all. ‘Of course Teacher’s is always blended to be true to William Teacher’s original blend,’ he says, ‘but the truth is that there are now far fewer single malt distilleries to choose from to do that. We still believe that William would recognise his blend today though, the one he created in 1863.’

As he unscrews the cap and pours two glasses, then adds a splash of water to one, the effect is alchemical – the aroma, leaping from the whisky as the water goes in, fills the air with festive smells of fruit, cinnamon and everything you would find in a fat Xmas pudding. That’s the 45% malt talking and the water is what makes it sing.

Robert, whose nose is his livelihood, has no truck with people who demand that a whisky should only be drunk neat. ‘When I’ve been in Japan, they’ve told me they drink Teacher’s with green tea,’ he exclaims. ‘Well, I say, whatever you want! Whisky was a base for cocktails way back in the 20’s and 30’s long before the introduction of vodka and white rum, no one thought it odd to mix with it then. Today though mixologists rarely reach for the whisky bottle, which I think is a shame.’ 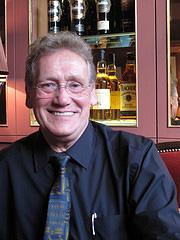 They call Teacher’s, on a label that has been updated over the years but never really changed, ‘Highland Cream’. ‘That was a very early message, everyone knew it was a shortcut and meant the best.’ says Robert, but as I taste it I find it really is creamy. It rolls across the tongue and down the throat with hints of pears and a wonderful silkiness in the finish with dabs of smokiness too. It’s not overpoweringly peaty though, as so many single malts can be, some to sickening amounts. Peat like oak in red wine can be easily abused and overused to catch a momentary style wave and Teacher’s is all about continuation and tradition.

We reminisce over a glass or two about the old ‘jigger cap’ that Teacher’s used to have when I was a lad. Not only did this serve as a handy measure, it could also be used as a drinking glass by people out fishing, hunting or playing sport. ‘It was remarkably popular, a surprise marketing coup,’ says Robert fondly. ‘Unfortunately with the advent of some people tampering with supermarket products we had to change to a cap that could not be removed or interfered with before purchase. A shame really.’

Well no one tampers with Teacher’s, not since 1863 and probably they never will. It really does taste as good as it always has; a blended whisky that is easy drinking but with real flavour, tradition and class. A drink to lay in for Christmas for sure and one to definitely give as gifts.