Last Easter I spent 2 weeks in China studying at the Sicuan Insitute of Higher Cuisine in Chengdu and learned to make these dumplings. In my classes at Eat Drink Talk we make dim sum pastry by hand but it is also fairly easy to use store-bought dumpling wrappers. The crimping technique can take a little practise to perfect but it isn’t as difficult as it sounds.

The filling for these dumplings is typically Szechuan – the Szechuan peppercorns have a tingling, numbing flavour that is quite addictive. You’ll soon find yourself ladlling them over your food with abandon just like the Szechuanese!

a one inch chunk of ginger, minced finely

1 tsp salt for cooking the dumplings

a pack of round dumpling wrappers 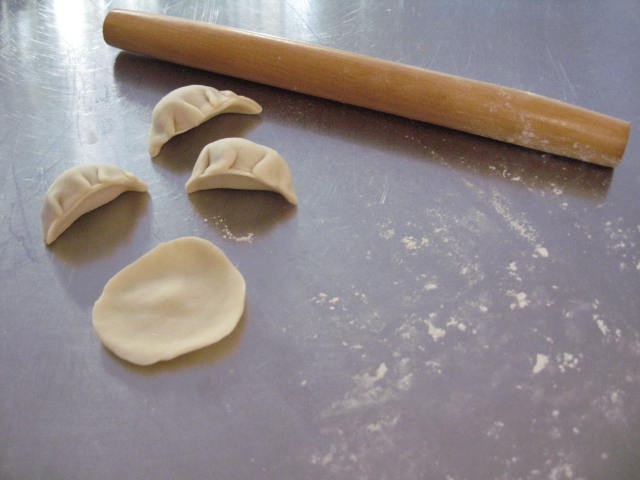 In a small saucepan, combine the soy sauce, spices and palm sugar and bring to a gentle simmer. Simmer for 20 minutes or until reduced by just over half. Allow to cool slightly, then strain out the spices and pour over the pork. Combine the pork with the remaining ingredients and mix with your hands until well combined.

When you have finished pleating the dough, ensure that you have a firm seal by firmly pressing the seal between your thumb and second finger. Place the dumpling on a sheet of parchment paper. Continue filling the wrappers until you have used up all the filing.

Bring a large pot of water to the boil and add the salt. Add the dumplings and give them a quick stir to separate any that have stuck together. Boil the dumplings for 6 minutes or until cooked through and serve hot.