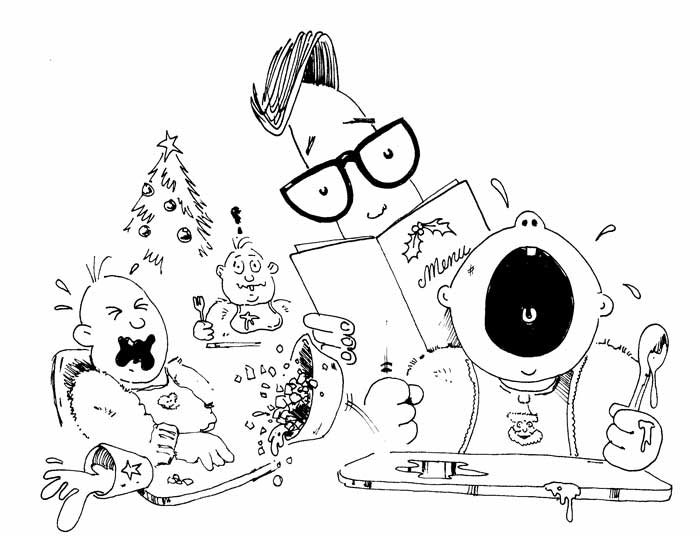 Having brought up sixteen children, fostered three and been a role model to thousands more I think I can say with some degree of confidence that no one loves babies more than I. Delightful, gurgling creatures they are and each time I have been summoned from the drawing room by a servant with the news that I am a father once again, I have always made a point of sending my wife my sincerest congratulations, before repairing to my club to stand a round of port.

Of course the days are long gone when the average middle class couple could entrust the rearing of their children to others. My own father saw nothing of me until I went to boarding school aged eleven, and then only to press upon me a ten shilling note and a grim warning to keep a wary eye out for gym masters and art teachers. Wise words, as we were to discover.

The present state of criminal class parenting of course is one where the parents are by turns foolishly negligent and madly over generous, heaping on their malodorous offspring corporal punishment on the one hand and Playstations on the other. The result as we have seen is a generation of ‘kids’ who have no conception of right or wrong. And yet the middle classes seem to have no better idea and nowhere is this seen more starkly than in the nation’s restaurants.

We are often told that we should introduce our children to dining out at as early as possible. ‘Yes,yes” the child experts cry, ‘if we did we would soon have a nation of children as well-behaved in restaurants, and as well used to adult flavours, as the adorable moppets in France, Spain and Italy.” I beg to differ. The foreign parent maintains discipline with slaps and harsh words, exactly as one always successfully did in this country before the fall of the Tory government.

In fact one observes that most foreign parents expect other adults to help with the training of children and see nothing wrong with a total stranger telling off their badly behaving child for them. In this country, as part of our general descent into wetness since the War, we are constrained by foolish laws and must instead engage our misbehaving child in analytical conversation, imploring it to re-examine its behaviour in the light of our intelligent and insightful comments and hence come to the correct conclusion. The conclusion any normal child comes to of course is that is that its parents are a pushover and there is no reason at all not to behave badly again as soon as the opportunity presents itself.

And so last week I entered a circle of Hell which would have made even Dante’s blood go cold, and he of course was an Italian my dears. A very respectable ‘gastro pub’ near to my mansion serves excellent Sunday lunches. Not the Carvery sort I hasten to add, but proper food cooked with some style and élan. Opening the door at around 1pm I felt I had entered a nursery by mistake. A wall of sound consisting almost entirely of babies screaming hit me like a fist. I do not mean toddlers, I mean babies so young you had to wonder if Mother (probably called Sam) had not come in the Audi straight from the maternity unit, picking up Father (probably called Charlie) after his regular Sunday football knockabout on the nearby common en route. In all directions and at every table could be seen bawling little bundles of red-faced babies, while their designer buggies littered the floor and could only be negotiated in the manner of a soldier who has belatedly realised he has wandered into a minefield.

Why? The babies were getting little out of it, being too young to have any idea where they were, let alone whether they enjoyed the pan-fried sea bream. The mothers were all looking increasingly desperate and swallowing large glasses of white wine while trying to open the nappy compartment of the toppled buggy. The fathers were doing their utmost to pretend nothing at all was happening, as fathers always have done and doubtless always will.

These striving young people, no doubt with good jobs in the media and generous maternity leave pay, could afford the meal but could not afford a baby sitter? Did they not have a parent themselves or a brother or sister willing to help out? What made them think it was a good idea to take a baby into a pub anyway?

I can only put the blame down to the odious smoking ban. Once cigarettes were stubbed out, the last barrier to bringing a baby to a pub (aside from common sense, or even an old-fashioned respect for other people’s happiness) went down. Toddlers too can be brought in and the parents invariably look on with beaming and encouraging smiles as the little darlings test the strength of the crockery or run around under the waiters’ feet until the inevitable happens and the crying is reinforced.

I have learnt my lesson. Sunday lunch is a meal best taken in the peace and quiet of one’s home, away from the new breed of parents and their charming children. No wonder there was no room in the inn for Mary and Joseph, the owner probably wanted a break.