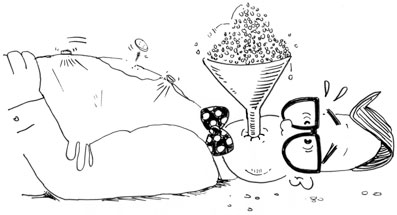 Word filters through to the countryside that once more the forces of repression, philistinism and Stalinism are on the march. Even down here far from the seething hell that is London we hear the crunch of their sandals on our soil, the rustle of their Guardian colour supplements and the unmistakeable whiff of self-serving sanctity in the air. I refer of course to the move to ban foie gras.

Never mind that French farmers have been making foie gras since time immemorial, never mind that the geese adore gavage and waddle as fast as they can to queue up for their turn at the feeding funnel, never mind that far worse things happen to chickens every day, and not so far from where I write, in order to keep the supermarkets stocked with affordable food for the masses. No the forces of no-fun are aiming their guns of piety at the poor old foie gras artisan.

Of course we do not need to look to far to see the real agenda here. The complainers view foie gras as a class issue. Unlike Matteson’s liver pate, foie gras is extremely expensive. Even I cannot afford to eat foie gras more than five times a week and recently had to reluctantly give up on the foie gras sandwiches that cook used to make for my journeys from Taunton to Paddington. If foie gras was cheap enough to be eaten by the great unwashed, then I very much doubt it would attract the negative attention it does.

It is unfortunately true that there exist in society people whose sole reason to get out of bed in the morning is to try and spoil somebody else’s enjoyment or pleasure. Not all of them read left wing papers, not all of them live in London, but many do. They attract like-minded bores and gather in groups to support and reassure each other that they are normal people, which they quite clearly are not. In fact I doubt if any of them have ever eaten foie gras in their lives and therefore have no idea just how delicious and addictive it is. The same is true of Panda meat which is why the Panda breeding programme is so important; a world without panda steaks or panda kebabs would be unthinkable.. As to dog, a meal extremely popular in the far east, I can only say that the people there will continue to cook, eat and enjoy dog meat no matter what some shaven-headed activist living in Islington has to say on the matter.

It is quite simply None Of Their Business what I choose to eat. I do not ask these protestors to eat foie gras any more than I ask vegetarians to eat meat. I do not picket Parliament demanding an end to brown rice imports on the basis that it makes people sanctimonious as well as flatulent. As to what the geese think of the whole issue I am sure that if they had any conception of death they would ask us not to eat them at all and instead set them free. As it is, having no higher consciousness, they simply live their lives as they have always done and always will, waiting to become food for humans. In those circumstances having a very large liver would seem to be the very least of their worries,