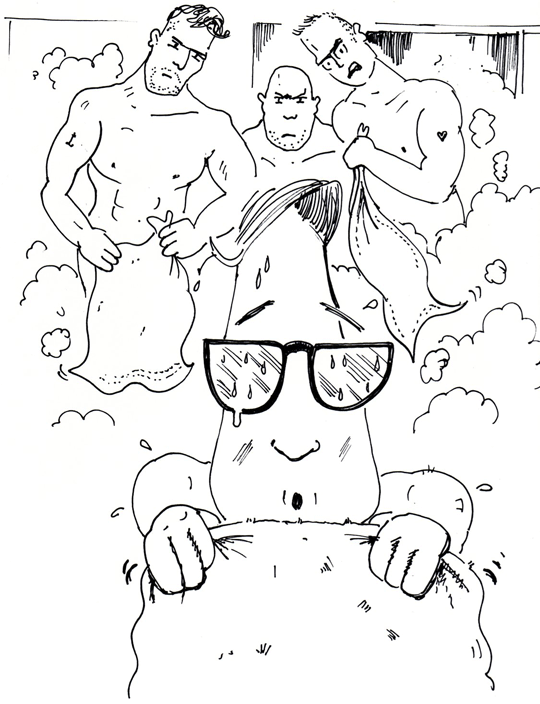 When I first started to discover food between the wars, it was really not at all fashionable. Indeed in the better country houses it was seen merely as a necessity. Anyone who had the temerity to savour his food, or expressed heresy such as likes or dislikes, was not asked back for weekend parties. My father, the first Earl of Hunt , used to believe that the only sport for a gentleman was hunting or fishing, and in the same vein always harboured suspicions that any man who liked his food was probably a bit of a whoopsy, as he liked to call the chaps we now call Friends of Dorothy. ‘That fellow jumps too low in the leapfrog!” he used to rumble disapprovingly whenever dear old Evelyn came to tea.

Perhaps it is this echo of a distant time that has led so many of today’s food critics to become so very, very butch. The rooms in which we critics gather now resemble the changing rooms at the Oxford rowing club, with hairy, squat men metaphorically flicking towels at each other and flaunting their private parts. Fine dining is out and Dickensian food is in, preferably cooked by a chef who has a fondness for the cup that cheers and a reputation as a swordsman. These corpulent critics egg each other on like latter-day Falstaffs with ribald comment and lewd suggestion. Given the size and torpor of most of the male critics however it’s doubtful whether they could rise to any sexual occasion, even if they could find a lady prepared to risk suffocation by favouring them in such a way. No it is just hot air and an awful lot of wind.

This would be bad enough, after all no reader wants to hear about faggots, pie and mash or sausages and gravy, they go out to restaurants to escape such boring food after all. Just because critics are tired of fine dining doesn’t mean everybody else is. No, what is worse is the new habit of manly critical eating. You and I dear reader when eating a meal, delicately raise the fork to our mouths and slowly masticate the food quietly before thoughtfully swallowing. The new Burpy/Farty critic does not. Instead he rudely snatches at the food as soon as it arrives at table as if it might somehow otherwise escape him, cutting it in an abrupt manner and snapping fork to mouth as fast as an adder striking. It is then given a few seconds exaggerated chewing, the critic adopting an appropriately serious expression whilst staring at a distant point on the tablecloth. The pompous message seems to be ‘I am a laboratory. This food is now under examination. Please stand by for my very important verdict.” When more than one critic is at table they try to out do each other with such posing, while I simply get on with my meal, making some mental notes of course, but otherwise eating like a normal human being.

It is all completely inexcusable, unless you subscribe to the theory that public schools brutalise boys forever. Nearly all the male food critics, apart from a few unfortunates, went to very good schools and then to the University. They then claimed their birthright of a secure and easy job on a national newspaper, bypassing the boring bit of ‘working their way up’. I tokk that easy route myself, of course but any comments about getting my job by bending down to pick up the soap in the shower at Eton are scurrilous – I attended a better school entirely.

Years of boiled cabbage, watery potatoes, gristly meat and tapioca leave an indelible mark. I for one vowed never to eat such rubbish again and, apart from National Service in the Royal Battalion of Honorable Caterers, (motto: If it’s brown it’s done. If it’s black it’s buggered) never did. The army by the way holds no surprises for anyone who has been to public school; the rules and food are similar but the uniform is different. I am told that much the same is true of prison.

No doubt as these young critics get older, and in turn sign up their children for jobs on the broadsheets, their manners may yet maketh other men impressed. For now I am obliged to grind my teeth and stamp my feet unseen in hollow,impotent rage. If one day you see an older, yet undeniably still sexually attractive man, leading a young thug from a restaurant by his ear then do say hello.