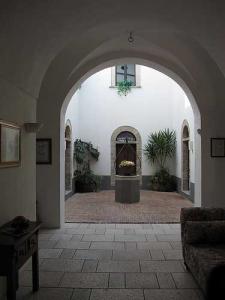 A cookery course and foodie safari, all run from a restored palazzo high on a hill in Abruzzo, Italy? Nick Harman takes a three day sampler to see what this almost unknown region of Italy can bring to the table

They say owners get to look like their pets, maybe that’s true of artisan food producers too. Luciano Caracciolo looks like he’s been assembled out of various component sizes of the salumis he produces high up in the mountain top town of Carunchio in Abruzzo, Italy.

He’s a jolly man, as well he might be. Creating salumis, including Ventricina, an Abruzzo speciality where a pig’s stomach is stuffed with finely ground meat and fat must be a relaxing job. It’s one that takes time, the mix of meat and spices must mature slowly in his climate controlled rooms where they hang like so many items in a Debenham’s clothes rack.

It’s the modern, health and safety way of course. In olden days, Luciano says, they would cut a branch off a tree and remove the bark, then into this natural cage they would jam the Ventricina and hang it to mature somewhere cool like a cellar.

Or indeed, his mother’s kitchen, ‘come on let’s go and see her!’ he says. Five minutes later we are in the poor woman’s house admiring her Ventricini dangling from the ceiling in the classic branch-held way. She seems quite delighted to have her home invaded by English foodies and lets her son show her off quite cheerfully. 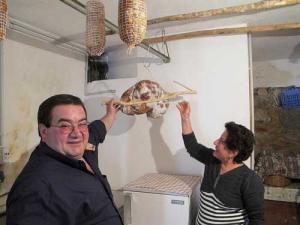 Back at the small salumi factory, Luciano’s wife, daughter and even grandpa too, join us in a cool stone cellar to sample the salumis and wash them down with the local Montepulciano wine. Luciano looks on approvingly as we eat the thick slices, none of your feeble thin bits here, Italians say a slice of salumi should be able to stand up on its edge unaided.

He doesn’t seem to eat much himself, no doubt realising that he may have consumed his lifetime’s share already, but he likes offering us more and more. They are excellent salumis, some spicy with the local paprika he adds at mix time, some bosky with the addition of pig’s liver. Beaded with fat, chewy without being tough, these are the real deal. I buy a load to take home and bugger the baggage allowance

A region that still remains unspoiled

That’s Abruzzo for you, this little known region of Italy is untouched and full of treats. It’s made up of mountain top villages so close together you think you could reach out and shake the hand of your neighbour, but they’re actually separated by a long drive down and a long drive back up again. Before cars, you would probably be born, married and be buried without ever really leaving your village.

So things have stayed traditional around here, including the food and its production. It’s an ideal place for a cooking holiday and, at the Tour d’Eau a restored Palazzo at the highest point of Carunchio enjoying stunning views, that’s what we are here for. 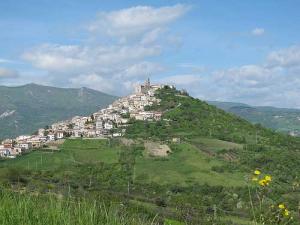 Almost an irreparable ruin before Massimo Criscio and his father took it on it’s now a small boutique hotel with a dedicated tuition kitchen where hands on demos take place in between excursions to local producers, beaches and towns of interest.

Arriving at Pescara airport, a short Ryanair hop from the UK, you’re welcomed to be taken back to the rather impressive Palazzo for an 8 course meal. Something we didn’t get to sample on this test trip as Sunday flights don’t get in till late in the evening. Even so Massimo’s chef had laid out large plates of mixed meats and a hot soup chunky with bread and beans. This and his father’s own unlabelled but really rather good red wine made the evening pass gently. Later I found my large traditional room,that I climbed leaden-footed to, was large and spartan in a good way and had access to a corner tower for a true mediaeval feel.

Off to the beach

The next morning we ate the traditional Italian breakfast of pastries and coffee. Those looking for something more savoury like eggs and bacon caused Massimo to rear back in horror. ‘That’s not what we eat in Italy,’ he admonished us. ‘Erggh, no not at all.’ 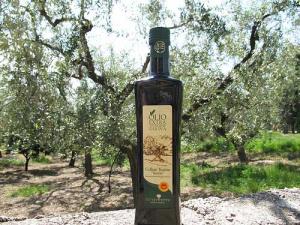 Our next few days would consist of a flexible itinerary but which included a visit to a small olive oil producer, involving an ear-popping, descent as the altitude changed, before heading out through deserted lanes and timeless scenery. At the producers we tasted various fine oils, learning to distinguish qualities and appreciate the subtleties of cultivation and harvest by the traditional means of ‘raking’ the branches.

Next a visit to the seaside town of Vasto Marina revealed miles of golden sands overlooked by the old town and already hot enough for some Italians to be out sunbathing, most wearing the obligatory Missy Elliot oversized sunglasses beloved of Italians of all ages. 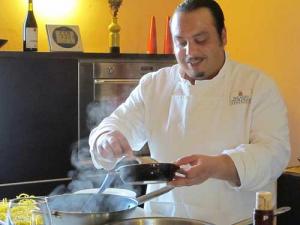 Lunches are provided as part of the package and at Trattoria Toscana we ate a most peculiar version of prawn cocktail, served with fresh chillies and a pair of scissors to dice them into the mix. Porcetta followed, a slice of pork paradise, a rolled belly stuffed and slowly roasted to melting tenderness and served with oily roasted potatoes. It could have done without the half kumquat on the side, but the acid did help cut the fat. Simple stuff, done well.

Lesson One – first fry your croquettes

The added extra of a break at the Palazzo is the cookery demos in the teaching kitchen on the first floor. Gino, a local polymath looking a bit like a Steven Seagal who ate all the pies, had his pigtail tucked neatly into his collar and took us through the making of a classic dish of parsley and bread croquettes fried off for colour then slowly steeped in fresh tomato sauce. He also made risotto the local way, with a less starchy rice than usual.

His was a bit more than al dente, quite crunchy in fact, but Gino assured us this was correct. You can never get Italians to agree on risotto, every town’s method seems to be different, so we decided to give him the benefit of the doubt. The fact that my filling fell out at the airport two days later was surely a coincidence. 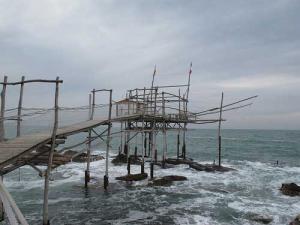 Next day a trip took us to the unique coastal feature the Costa dei Trabocchi. Trabocchi are spindly, strange, wooden piers built out onto the rocks and accessed by shaky rope-strung pathways. They are essentially ancient fishing machines, holding long wooden arms out into the water. These lower a large net flat on the sea bed which is then winched up by hand at regular intervals to reveal a haul of tiny fish.

Generations of families have made a living this way, building the machines out of whatever they could find on the seashore. They all look superficially the same but are all different in their own ways. Until recently you would never get on board one unless you owned it, but the trabacco we visit has been opened as a living museum and also as a restaurant where, at night for a few weeks a year, you can sit outside on the creaking structure and eat classic fish dishes cooked in the little hut.

The Trabocchi are wildly romantic and impressive but they need tourists to survive now that the Adriatic is all but fished out. Massimo tells us that the fish they do catch they use to make a traditional fish stew. ‘It’s good,’ he says, ‘but wow, it’s really full of bones!’ He didn’t seem to be a fan. 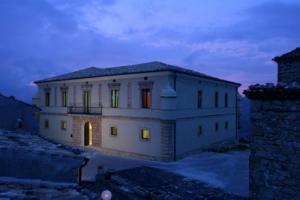 That afternoon after a big lunch at La Taverna, a fish and pasta restaurant in the ancient town of Vasto itself, we cooked again at the Palazzo (pictured right) this time learning how to stuff and braise the artichokes the locals love so much. A range of teachers come in to take classes, each bringing their own take on Italian cooking and their own style. Today’s with Cheryle Molino was more hands on, with plenty of hands on wine glasses. As the sun began to go down we created Prosciutto rolled with rocket and pecorino as well as the stuffed artichokes.

An all too brief trip ended with the ride back to Pescara airport and a picnic we made for ourselves from the local incredibly well-stocked supermarket and eaten on the grass outside the concourse under the benign eyes of the security men.

A break at the Palazzo is one that introduces guests to a region spared the ravages of mass-tourism and mass hotel building. Up on the hill the Palazzo stands next to what was an even larger palace, now a pile of stones with no roof and the villagers don’t care. Time crawls here for the locals but for the visitor it passes too fast. Back at Stansted, my case full of salumis, I missed the mountain views and the tranquility of Abruzzo. Nibbling a Ventricina on the Stansted Express didn’t really compensate, but it helped.

Abruzzo Cibus Culinary Tours are based in the Tour d’Eau, Via Monte n. 8, Carunchio, Abruzzo, Italy