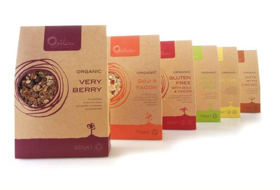 Help your health and that of the planet

By tucking into a bowlful of a brand new muesli you won’t just be helping your health, but also that of the planet.

The new ‘Into the Garden’ Range of mueslis from Alara (based just behind Kings Cross Station) includes six fantastic flavours: Goji & Yacon, Date with Cacao, Fruit, Seed & Spice, Very Berry, Gluten Free with Goji and Yacon, and Active; each has been formulated using ingredients that not only taste great but also have powerful health benefits. For example goji and cacao are thought to have the highest anti-oxidant content of any natural ingredient on earth, yacon is renowned for its strong prebiotic benefits, and amaranth grain, used in the Active brand, is higher in protein than the usual grains used in muesli.

But by tucking into a bowl of Alara’s muesli you aren’t just helping yourself. As the first food company in the UK to go zero waste, absolutely nothing at Alara is thrown away, but instead is recycled in one way or another. Likewise the packaging on the ‘Into the Garden’ range won’t be going to landfill either; it is packaged in recyclable boxing (cardboard from sustainable resources) and a bag made of Super-ECO film – completely biodegradable within 18 months.

The company has also set the target of becoming carbon neutral by 2010, which they are well on their way to doing with installations such as a small wind turbine and area occupancy sensitive lights.

Perhaps most exciting however is what is going on in the company’s new ‘Permaculture Forest garden’. Created after removing over ten tonnes of rubbish from wasteland in Kings Cross, the organic garden acts not only as a carbon dioxide sequester but as a place for the local community to enjoy real food and learn about the benefits of going organic.

As if that wasn’t enough at one end of the garden is a very special compost heap.

Alara are looking to be the first London company to build an anaerobic digester to help power their factory. An anaerobic digester effectively uses biogas created by microorganisms breaking down waste to create fuel to power heating, transport, electricity etc. Whilst there are a few anaerobic digesters in the country, this will be the first time a small scale commercial digester has been made and all eyes are on it to see if it can be rolled out to other cities around Britain, and possibly even family homes.

Alara’s dedication to the environment has been recognized and they were recently named as ‘Green Company of the Year’ at the Fast Growth Business Awards and Alex, the director, has just been named as a London Leader of Sustainability, given the job of encouraging others to follow suit and go green.

So now you can enjoy your breakfast cereals with a clean bill of health and a clear conscious.