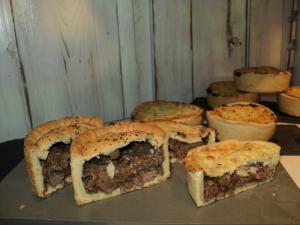 It was early morning, I’d been to an indulgent ‘thing’ the night before and my senses were neither as clear or crisp as they might have been. Logic wasn’t kicking in at all. So when I searched for 1 Marylebone, I was totally flummoxed. Nobody told me it was a church – well, an ex-church – if they had I might have got there on time, or, less late anyway.

I did eventually find it, walked in and was quickly ushered into this former place of worship to see rows of chairs facing what would have been the altar. An Asda senior manager was at a lectern telling the congregation of media flunkies, myself included, about how they have been working relentlessly over the last 15 months or so to improve 3,500 products across their range. We were told that they had conducted some 200,000 blind taste tests with 40,000 consumers in order to get it right. It was this element of the process that led to the name for the revamped range of foods – Chosen by you.

Whilst sitting listening to what the Asda top command had to tell us I couldn’t help wondering why they had made the central seating area so small that not all the invited guests were able to sit down. White sheets were draped along the length of each side of the seating area, all was soon revealed, quite literally. The drapes removed and it was suddenly like sitting in the middle of a shopping aisle. We were invited to look at the new presentation packaging for their products and their new products. Then trays of tasters began to arrive as we circulated.

As I moved around I nibbled on a miniature steak pie, which had some very tender meat in it, a half of a cheesecake from the Extra Special range and then some Loaded Sticky Toffee Pudding ice cream. They were all good. As I stood looking at a display of meat pies, I was asked ‘what do you think is excellent about our products?’ a bit of a leading question, but it’s an indicator that Asda staff believe in what they sell. Stroppy individual that I can be, I insisted that they cut in half two of their display pies chosen at random so that I could see how well filled they were, they obliged quite happily and I have to report that they were pretty full.

Asda have introduced a lot of new products and tell us that they have made improvements to many, both in the Chosen By You and their Extra Special ranges, all three items I tasted while there were fine examples. It’s certainly worth taking a look at what they now have on offer and trying some of their new products as well as your old favourites, which you may find taste a little better. See for yourself.