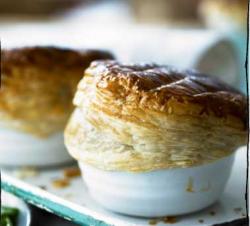 Now here is smart marketing in action. Chaz isn’t content to just make quality pies using, as he says, the best ingredients – he wants to create a lifestyle too. ‘I came up with this brand new range specially designed to give couples the chance to steal back some time together. So, turn off the phones, dim the lights, crack open a bottle and enjoy a wonderful night in over some really lovely food.’ he says winningly on the box.

Yes it’s the old ‘busy busy lives’ story again. We’re all so pressurised by our oh so totally demanding jobs that all we can do when we stagger home in the evening is stick something pre-prepared into the oven. Never mind that all the horrible housework has already been done by Katarzyna, working on a minimum wage, we’re exhausted from spending the day on Facebook and Twitter and need pampering with something from Waitrose.

So Charlie to the rescue. The big concept is to put two pies in one box. Genius. Made for couples see? Then put a picture of Charlie on one side ,together with his mission statement and rather patronising instructions ‘be careful, they’ll be hot’ (presumably for those people unsure know what an oven does to food), and add a very twee cartoon of a middle-class couple saying something humorous (allegedly) on the lid. Honestly I don’t know how I stopped myself hurling the whole box through the window without even tasting it. However, duty called. 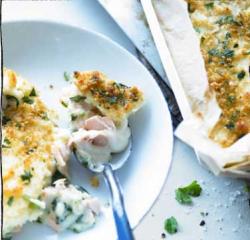 So what about the pies? Well the fish one is designed to feed two ‘people with ‘Delicate haddock and salmon in our traditional handmade parsley sauce with creamy mashed potato and a crunchy Cheddar and breadcrumb topping, but it could have done with a lot more fish, a lot more mash and a lot less sauce – the small amount of fish present was swimming in the stuff. We needed a spoon. Not a bad taste but the lack of fish meant that this particular exhausted couple were hunting round the kitchen for something else to eat half an hour later. A pie for one person, or two slimmers, only. Packaged in a floppy paper and cardboard tray, it was a bit of a bugger to serve too.

Steak and Ale pies each came in a dinky little ceramic dish to add value and with a decent wedge of puff pastry on top. Apparently each pie is hand made, which may explain why one pie was bursting with meat while the other had almost none. We had to share out the filling. Hand made is good obviously, but consistency should not be abandoned.

These were decent pies, once the meat situation had been sorted out, but the overriding flavour of the jus was one of tomato puree dissolved in beer. The ingredient list mentioned cocoa powder, which was odd. 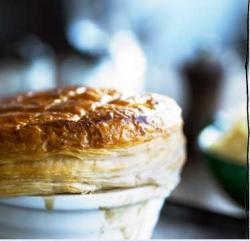 And finally Chicken and Mushroom pies. These were the best of the three by far, good chunks of chicken, clearly defined mushroom and while the sauce was still too thin and refused to cling to the filling, it wasn’t a lake like the others. The puff pastry was useful to dunk into the sauce to get it out and once again the little china dishes can be stored away to use for home-made dishes.

The pies are just the tip of the Bigham iceberg. of curries, tagines, lasagnes and whole lot more. While the packaging tries to suggest a genial one man operation, it’s clear that the company is a lot bigger than it appears. The pies we tried, clearly aimed squarely at the Waitrose type of shopper, are okay but the packaging is better than the pies. The sauce issue needs to be addressed, as well as consistency and portion control, to make them real winners.