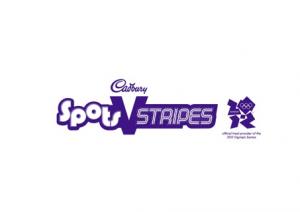 To celebrate being the ‘official treat provider’ to London’s 2012 Olympic and Paralympic Games, Cadbury have launched a special chocolate Challenge Bar.

Cadbury are trying to encourage the nation to play more games, which can only be a good thing seeing as Stuart Brown, a Play Researcher pioneer found that ‘play is crucial: It helps to create a successful society and cohesive communities’.

With this in mind Cadbury have launched a campaign called Spots v Stripes. The idea is simple; people pick which team they want to be, spots or stripes, sign up to the website and then play friends, colleagues and aquaintances to earn points.

So what does the once British chocolate company Cadbury want us to play? Well anything really.

The best thing about the Spots v Stripes campaign is that it not only encourages play but creativity too. You can play any game you can think of to score points from kiss chase to eye spy and lots of other random games as well. My favourites so far are probably tea bag golf which involves throwing tea bags into a selection of mugs and a tip toe challenge where you have to stand on your toes for as long as possible!

The new chocolate Challenge Bar is a limited edition milk and white chocolate bar divided into three squares, one for the whoever is spots and one for stripes with a winners square in the middle. Whoever lands up winning the game you play gets to devour the winners square.

Cadbury’s chocolate Challenge Bar is available for a limited time from all good retailers.