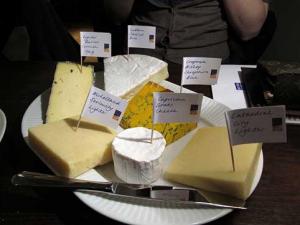 What a great invention cheese was. Who on earth thought of mixing milk with rennet and then eating the result? One theory is that back in the mists of time people would transport milk in animal skins and, after jogging along for a bit, avoiding mammoths and whatnot, they noticed their milk had separated out. A nice story, could even be true, but however it started, cheese is now a food favourite world wide.

The British Cheese Board exists to champion the cheesy produce of our particular island, as there are over 700 different named cheeses produced in Britain for it to promote. The BCB aims to educate people, not just in the variety of cheese available, but also about the benefits of the low fat cheeses too. This is because the cheese industry and BCB members are taking on criticism of the levels of saturated fats in cheese and are increasingly offering low fat alternatives to give consumers more of a choice.

So with this in mind I sat down with Nigel White, the BCB secretary to taste a selection of British cheeses of all types and fat contents.

We kicked off by defining terms, ‘If it’s called Low Fat, it has to have less than 3% fat such as a Low Fat Cottage cheese or a Low Fat cheese spread like a “Philadelphia style” cheese,’ explained Nigel, ‘while Reduced Fat means it must have at least 30% less than standard cheese.’ 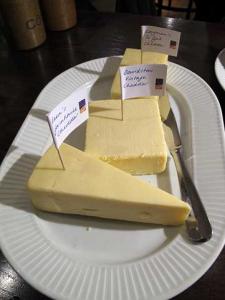 ‘These low varieties’ he points out as he eyes up a chunky cheddar, ‘only came in after the 1990s, before that cheeses were available only as full fat. To make a low fat, or reduced fat cheese, the makers basically just take some of the cream out of the milk. Initially though the cheese made this way wasn’t much good, as making a reduced fat cheese is not as simple as you might think. Over the last years they have improved dramatically, although if you were laying out a fancy cheeseboard many people might not be including the low fat cheeses.’ The new generation low cheeses do keep the flavour, what they lose is the texture but in return they get more calcium and proteins too.

‘And vegetarians can also enjoy the range of British cheeses, ‘ he says cheerfully, ‘so many of them are made with non-animal rennet these days. It works as well and is cheaper. It expands the market for the cheese makers, vegetarians can eat cheese. Everybody’s happy.’

Well as it happily happens we have a tasty looking cheeseboard right in front of us so we dig in, beginning with reduced fat then half fat and then the full on cheddars.

‘Cheddar has been made in this country since Roman times,’ says Nigel wielding his knife enthusiastically, ‘probably before that but the Romans domesticated cattle and so made it a more widespread.’

We start with Longman’s. This is a traditional farmhouse maker who has made a half fat cheese, i.e. half the fat of Cheddar so it’s about 15% fat, in fact. We squeeze a small lump between our fingers in the approved testing way; it’s firm, slightly rubbery and when popped in the mouth has quite a nice mild flavour. The texture, Nigel points out, would be ideal to be easily sliced in a sandwich. ‘Perhaps with some tomato and lettuce,’ he adds dreamily. 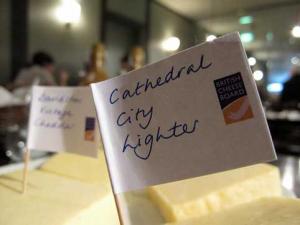 Next up to the knife is Davidstow Cathedral City Lighter, which is made not far from Tintagel in Cornwall. ‘They have always made brilliant cheese,’ Nigel enthuses, ‘good cows, good grazing. This light version is the biggest selling cheese in the category of reduced fat.’ It’s quite hard and the texture a bit rubbery again, but it breaks more crumbly than the Longman’s. ‘This is more how you expect a cheddar to be,’ Nigel states eating another piece. ‘It has a characteristic nutty flavour which becomes more pronounced with age. These are about 9 months old which is about the age all these cheeses go to market,’

I like a bit of strong cheddar and already know McLelland Seriously Strong Cheddar, I didn’t know that they had recently come out with Seriously Lighter. ‘This is a different style of cheddar from Davidstow,’ Nigel explains, ‘McLelland look to get a bit more acid in their cheese for a stronger tang.’ It’s certainly a bit more crumbly than the Davidstow and a touch more chewy. I like the pronounced flavour and can see this would be a good reduced fat cheddar for everyday use by grating and slicing.

We move on to some full fat cheddars and dive in on some Davidstow Vintage. This is 18 to 2 years old and it fractures as we cut it. This is a classic sign of a full fat cheddar I’m told. It’s very nutty in flavour and has a sweet, long finish. ‘That deep flavour means you don’t need to eat a lot to be satisfied, ‘says Nigel watching me eat a lot. ‘That’s good as it’s got a lot of fat, being a full fat cheese. You don’t need a lot in a recipe either to get the flavour out, it would be great in a cauliflower cheese. It costs more than the others, but most good things do!’ 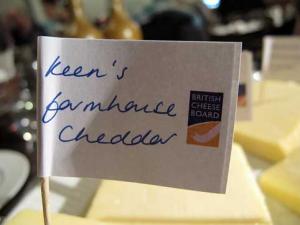 The Keens that we try next is a traditional raw milk cheddar with a lovely aroma and firm textured with quite a bit of acid. This makes it pleasantly astringent and it has complex flavours which last and change in the mouth. ‘West Country Farmhouses are strictly controlled,’ Nigel explains, ‘they must use mostly the farm’s own milk and must be made by the traditional cheese method and then matured for at least 9 months. As they mature they get better, a 25kg truckle of fresh cheddar is cloth bound and sealed with lard or butter then air dried. The wrappings are all stripped off before sale leaving a nice clean rind.’

‘You can get all these cheddars in pretty much every supermarket,’ Nigel reassures me rattling off a list of High Street names. ‘The supermarkets know there’s a good market for the low and reduced fat in particular and you’ll find they are all clearly labeled.’

Just as little treat we move to some special British cheeses. First a Lubborn Somerset Brie. I had always assumed Camemberts and Bries had more fat but I was wrong. ‘They in fact have less fat than cheddar, although people do assume the opposite,’ agrees Nigel. ‘The soft cheeses have kept more of the water in them from the milk so they have less fat and the water makes them soft. But of course the downside is that they don’t keep as long as cheddar. But they do need to ripen,’ he insists, waving his knife at me admonishingly. ‘The Bries and Camembert will have a chalky centre when you buy them, which will go with a few days if you leave them out maturing when you get them home. And you really should.’ 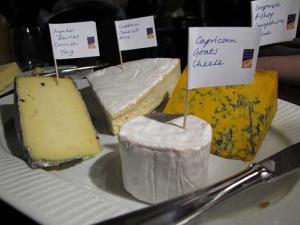 ‘Of course,’ he says lopping off a slice of the Brie, ‘you need to check any cheese for degree of ripeness before you buy. ‘Any decent deli or supermarket will let you taste before you buy as age is crucial to the development of flavour.’

In fact the Lubborn Somerset brie is overall still too chalky in the centre but the flavour is there at the edge where is has begun to mature. ‘This, when matured fully, is nice and creamy,’ Nigel says carefully edging the soft bit away from the centre. ‘It’s made in St Thomas home of Mr. Blobby actually, and the cheese dairy is quite new, 10 years old and they also do a goat’s cheese, Capricorn.’ He slices a piece of the Capricorn and holds it up for inspection. ‘What we want to see here is a nice gooey bit on the outside and the cheese sticking to the knife. This is quite mild now, it will get more complex as its gets older, and I think it’s a goat’s cheese for the English palate. After the goats are milked the milk is cooled very quickly, unlike the French way of doing things which creates a more rustic and strong cheese. Capricorn is a good entry point for the goat’s cheese beginner or someone who is convinced they don’t like goat’s cheese. They will like this.’

Now here’s one I’ve often seen but never tasted, Cornish Yarg (the maker’s name, Gray, spelt backwards. It’s a cross between a Caerphily and a Wensleydale apparently. The outside is lined with stinging nettle leaves and then sprayed with a penicillin mould; this accelerates the ripening of the cheese as the enzymes from the leaves and penicillin penetrate into it. You can see the darkness around the edge and the nettled rind is edible. The cheese has got a quite subtle flavour, slightly sweet. ‘Give it a few weeks more maturity and it will be a different cheese altogether,’ Nigel assures me 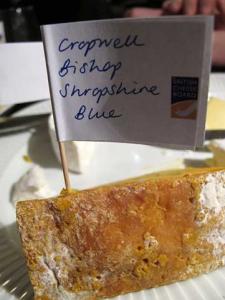 And finally a Shropshire Blue, which is made by the Stilton people. ‘It’s a very similar process Nigel says, committing the cardinal sin of cutting of the cheese’s nose as he does so. ‘The cheese is pierced by wires to let the air and penicillin in. The orange colour comes from annatto as used in Red Leicester, it’s a natural coloring which from a tree husk that grows in South Africa and has been used for at least 300 years’

But why bother dyeing a cheese red? ‘Ah well that’s interesting,’ says Nigel as we push our plates away. ‘Back in the 17th century cheese was not just made from whole milk, it had added cream too. Carotene, the orange colour in carrots, is present in the grass the cows eat so this very full milk contained lots of carotene and this came through the cheesemaking process leaving the cheese a bit orange. This was a clear indication you were eating very high quality cheese.’

‘So scurrilous people thought they’d make cheese without the expense of the extra cream and dye it orange to fool people into still paying the same price. Now of course it’s just become a traditional thing to do.’

And so we leave the cheeseboard, but not before I have swept the remaining chunks into a goody bag, all in the interests of science of course, I want to see how that Brie matures.

It’s been educational, especially about how the low and reduced fat cheddars can still deliver good flavour while keeping our arteries a bit clearer.

Next time you’re in the deli, or supermarket, turn your back on the French and have a look at the Great British cheeses. The good news is that you can fly the flag and still reduce your fat

Find out more at www.britishcheese.com and see some great low fat cheese recipes as a pdf here.

Cheese is packed with protein

Cheese is a source of vitamin B12, needed for red blood cell formation