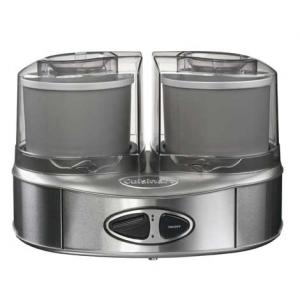 For every season churn, churn churn. Yes, I am humming an old Byrd’s song as I load up the Cusinart Duo ice cream maker. It seems appropriate, after all the world’s most celebrated ice cream gurus, Ben And Jerry, are themselves old hippies who no doubt grooved to The Byrds themselves in their day.

Churning is the bit of ice cream making that you really do need a machine for. You can make ice cream without a machine of course but it means taking your mix out of the freezer every hour, beating it like mad (not easy) and then replacing it. This can take some time in all, but it has to be done to prevent the ice forming large crystals in the mix, which is not at all what you want.

Ice cream machines come in two types. The ones that actually have freezers, but which are semi-professional and rather expensive, and the ones where you use your home freezer to pre-freeze the mixing bowl before putting it on the machine for the actual churning.

The Cuisinart Ice Cream Duo is the latter type but where it scores over its rivals it that it has twin 1 litre bowls. This means that you can either make double the quantity, two varieties at once or, best of all, have one bowl freezing while working with the other.

We tried the most basic ice cream first using double cream, full milk, sugar and vanilla. The bowl went into the freezer overnight and was ready by about midday. Different freezers will work quicker or slower but the simple guide to readiness is to shake the bowl; if you can’t hear the refrigerant sloshing about then it’s ready.

Best to move fast though, you need that mix all ready to go before taking the bowl out the freezer. Quickly add your mix, put the bowl onto the machine base, drop in the paddle and fit the cover and turn on.

You can then watch the alchemy happen. After about ten minutes of churning you see the mixture change texture and become granular with mini ice crystals. After about ten minutes more, as you fend off the children gathering noisily around you, the unmistakeable texture of ice cream becomes apparent. The mass almost doubles and waves of smooth ice cream begin breaking over the top of the paddle.

You can eat it at this stage, and it’s hard not to, but it’s best to place it in a plastic bowl with a tight lid, drop it into a freezer and then stand guard with a sharp stick to prevent those kids from earlier trying their luck. The texture becomes firmer after an hour or so.

The taste is remarkable. The four ingredients, the provenance and quality of which you can be assured of, create a luxurious ice cream that cries out for something special to go with it. Fresh strawberries, an apple pie or home made chocolate brownie. The quantity made is large, economically far better that shop bought, and with no preservatives or additives. 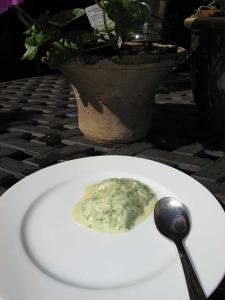 Where the fun really starts though is creating your own special recipes. We used Skye Gyngell’s recipe for mint ice cream, creating a syrup of mint using the glut in our garden mixed into an egg custard blended with cream and milk. This, after churning, came out slightly sloppier (but it was a very hot day outside). After a few hours in the freezer though it emerged as quite the most subtle, delicate and delicious ice cream we had ever tasted.

Emboldened and with the spare bowl system meaning we always had one bowl frozen and ready to make ice cream at any time even, I am ashamed to say, after an attack of the munchies at midnight, we tried Chocolate Cherry Frozen Yoghurt as a healthy option.

This did require some prep work as the mix has to be warm to melt the chocolate and so this must then be cooled down again before churning. About two hours in the fridge, nothing too drastic.

Yoghurt ice cream is a whole new dessert experience, it seems as sinful as ice cream on the tongue, but it doesn’t hit the hips so hard.

Sorbets also came out well; all you need is lemon juice, zest, water and sugar. Obviously organic lemons are best and if you do as we did and add a shot of limoncello, so much the better.

While the sun shines an ice cream maker is your bestest pal, and in the cold of the winter you can still have fun creating additive-free ice creams and being Heston Blumentahl with your own whacky ideas.

Making your own ice cream is dead cool, man.