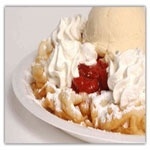 Original American Funnel Cakes started to be imported into Europe last year and after a very busy summer at numerous events and fairs, many people have now started selling them in pubs, catering trailers and restaurants, across the UK, however Hampstead people seem to enjoy them the most. Funnel Cakes are popular around the United States at ballparks, fairs and festivals, markets, school fetes; essentially, anywhere people meet.

They do not look like a funnel and don’t really look like cakes! Funnel Cakes are made by pouring batter through a funnel into hot oil in a circular pattern and then quickly deep frying it until golden-brown. They are often served with powdered sugar, jam, or other toppings. Funnel Cakes can also be made at home, with the use of a frying pan.

Funnel Cakes are a popular offering at outdoor food stands in carnivals, County and Renaissance fairs, arts and craft shows and seaside resorts. When made at concession stands, a separate funnel is not used; instead, the batter is poured from a purpose-made pitcher (jug) with an integral spout.

Funnel Cakes resemble the items known as fried dough or “elephant ears,” however these items are made with a risen yeast dough, whereas funnel cakes are made with an unleavened batter.The Finnish version of Funnel Cakes is: tippaleipä, and are traditionally served at May Day (Vappu) celebrations.