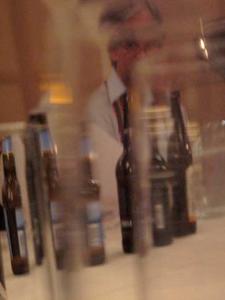 I like pie but unfortunately pies don’t like me. Shop bought pastry of any kind makes me really rather sick. It must be the fat the big manufacturers use, or maybe it’s some other nasty they slip in, but whatever it is me and Pork Pies are now forever strangers.

So an invitation to eat nothing but pies for an evening is a bit of a challenge, but I suspect that Higgidy hand made pies are probably lacking in dodgy ingredients and can be eaten with impunity. I and my stomach are happy to say this was indeed the case.

Beer comes in a wide range of flavours, textures, colours and alcohol strengths. In terms of colour, it goes from white to all shades of lemon, from orange to red, and from brown to deepest black. Beer has many ingredients from which its flavours can be drawn – water (95%), barley or cereals (4%), with hops, yeast and sundries such as brewing sugars, fruit or spices under 1%. So matching is possible.

Upstairs at the White Lion in Parsons Green, having pushed past the rugby players and their ‘in publishing’ girlfriends whose manor this indisputably is, I find a rather austere but pleasant room that has its windows open to admit the unseasonably warm evening air. Glasses are placed next to the beer names, to avoid the usual half-time confusion on these things, and pie smells are wafting from nearby ovens. 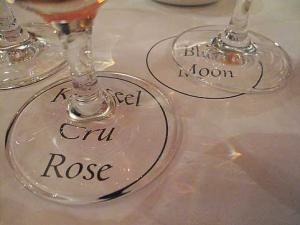 Higgidy pies is a jolly little concern, run by jolly people with a jolly hockey sticks manner. The website is fun, bordering slightly on teeth-gratingly twee, and there’s no doubt they are all passionate about pies. They make them by hand after all, and that can’t be easy. It does mean that no two pies are exactly the same shape and even the ingredients can be distributed differently in each pie. Some manufacturers would move to ruthlessly stamp out such inefficient practice, but Higgidy quite rightly celebrate it.

The result is a range of pies which really are very good indeed. One of the problems with this tasting is that instead of trying seven mouthfuls of beer with each pie, there’s a tendency to eat the pie and forget to drink the beer. Discipline is needed.

And so we try the first pie, a Spinach, Feta and Toasted Pine nut one, a bit of a Meditteranean concoction and a bit poncy as pies go. I can’t see it being eaten at many football matches, it probably has a short throwing range, but it would go down well at the Polo. There’s a little bit of Parmesan in it, as well some cayenne in the pastry, and the salty feta is finely judged by whoever made this one.

Beers are swilled and slurped before we all pick our best three with each pie. The beers are all bottled and all unique in their own ways. It’s an interesting experiment; with the various debates and discussions often boiling down to the basic question of ‘Is there any more of that pie?’ They really are that good. 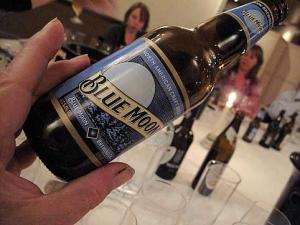 And the beers go great, especially with very hot pies. When you’re suddenly making monkey noises, beer is definitely better at cooling you down than wine will ever be. We keep coming back to the Blue Moon as best, wondering whether it really is the ideal partner for all the pies or whether it’s just because we simply like it a lot. It calls itself North American, but the small print says Brewed in Canada, perhaps they hide that detail to avoid prejudiced drinkers dismissing it out of hand.

British Beef, Stilton & Ale pie though only has one beer that suits its majesty and that’s Worthington’s White Shield IPA. A combination that makes you want to stand up and salute the Union Jack, especially after a few bottles. A great pie and a great beer.

Moroccan Vegetable & Feta ‘Little pie’ is made with slow cooked tomatoes, aubergines and feta with a puff pastry star on top with caraway seeds. Slightly sweet it suits the sharp beers, the Zatec and the blue moon, their citrus notes balancing out well.

And finally Chicken & Ham Pot pie available from October 21st and encased with hand folded puff pastry and filled with British chicken, baked ham and leeks in a creamy sauce, topped with a puff pastry hat. I am always a bit suspicious of chicken pies, I suspect them of being killers basically, but this is a quality product using no dodgy mechanically recovered meat from chicken Gulags. I still don’t find it that exciting, though, the colour is bland and the flavour ho-hum, but the ham helps lift it out of flavour despond.

So as a plate of chips appears and we drain the dregs, the verdict is solidly in favour of drinking beers with pies. All the beers were good, except for the Sol which as far as I am concerned still reeks horribly of the 1980s and prats like me standing around wearing white towelling socks and drinking from the bottle. Thank God there were no camera phones then and thus no pictorial evidence to haunt me.

Waitrose – just the little quiches at the moment, but the vegetarian pies are going in next month

These are the official beer tasting notes as supplied by the experts:

Kasteel Cru (5.2%abv) 330ml, Alsace. A sparkling bière brut, this beer, from Alsace, is a demonstration of innovation. Natural soft waters are the base for a light golden sparkle, with floral top notes, hints of rose and a light airy maltiness. The beer has a herbal butteryness from the champagne yeast, a lively carbonation and yellow citrus zing.

Sol (4.5%abv) 330ml, Mexico. Brewed since 1899 this is ‘Mexico’s original sunshine beer.’ Sol is a blond, light, festive and refreshing golden coloured Pilsner-style Lager, with a fresh malty, fruity-lemony flavour and a soft, quenching dry finish. Serve chilled and drink from the bottle, with a fresh wedge of lime in the neck, to accentuate the floral citrusy aroma of the beer.

Kasteel Cru Rosé (5%abv) 330ml, Alsace. A classic biere blonde d’Alsace, a sparkling brut, and flavoured with elderberries. It is a beautiful pale pink colour from the berries and has very delicate fruit flavours.

Blue Moon (5.4%abv) 355ml, Denver, Colorado. Blue Moon is a North American craft beer brewed and spiced in the Belgian tradition for a complex taste and a smooth finish. A refreshing, unfiltered wheat beer, brewed with oats for creaminess and spiced with the perfect combination of orange peel and coriander giving it gentle zesty orange flavours. The suggested serve is with an orange slice or wedge to bring out the subtle flavours of the orange peel and coriander.

Grolsch Weizen (5.3% abv) 500ml, Holland. Produced from 60% wheat malt and 40% barley malt, Grolsch Weizen is more full bodied than its Belgian equivalent (wits), but more elegant and delicate than the German (weiss). During fermentation the yeast floats to the top of the brew where it is separated from the beer. This gives a far softer taste than you get from a lager. The beer is not filtered – the proteins and yeast give Weizen its special cloudy colour and its soft and refreshing taste.

£1.98 from Asda, Morrisons and Sainsbury’s

Zatec (4.6% abv) 330ml, Czech Republic. The Zatec region is famous for the quality of its hops. Fruity and woody characters mix with citrus tones from the Saaz hops, combining to deliver a symphonic blast of flavour, reminiscent of bitter honey.