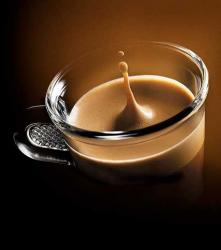 We had a look at the Nespresso coffee machine a while back; you know the one that George Clooney advertises with his trademark wolfish grin? It’s a smooth machine; good looking in all its variants but somewhat exclusive due to price and the fact you have to buy the coffee capsules on line.

Even so, it’s one of the best and simplest to use and the range of coffees available is large and varied. Now to add to that range they have brought out limited edition Kazaar.

Despite sounding like something a warrior shouts before chopping off an enemy’s head, this is a super special coffee that according to the box is a ‘daring blend of two Robusta and a separately roasted Arabica from South and Central America.’

They don’t actually explain what’s daring about it, presumably it’s a blend that was deemed palate challenging rather than a blend that might catch fire or explode in your face.

It’s certainly kick-ass strong. It’s bitter, as all proper coffees should be, and as dark as a Spinal Tap cover. Almost peppery in taste it would make a luxurious after-dinner coffee to sober up guests to get them out the door, as well as a morning motor starter, which is how we’ve been using it in the office.

The way Nespresso are going on about it, you’d think it was the second coming rather than a coffee but there’s no doubt it’s special. The online launch features a stunning woman extolling the virtues of Kazaar, an endorsement slightly weakened by the fact that she keeps looking down at her script while pretending not to. Perhaps she’s just watching her step.

It’s Facebooked and it’s Tweeted, showing Nespresso’s faith in the power of social media, although some of the positive comments seem ‘astroturf’ as the experts call it when comments are possibly planted by employees of Nespresso.

Kazaar has an intensity of 12, which is again rather Spinal Tap like as the dial only normally goes up to 10. This may explain why I haven’t slept for three days and am beginning to look like Keith Richard.

I think I need some brown sugar.