Macarons? Really? You sure? Been there, done that, had the sugar rush. Yet, judging by the chattering 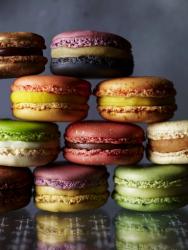 classes clamouring for the candy-coloured confections, it seems the appetite for the whimsical, bijou mouthfuls remains unsated. And, when they’re so deceptively insubstantial, how could it be?

Especially when they’re free. Everyone loves a freebie. And there’s no doubt that, when it comes to matters macaron-y, Pierre Herme is king. Pioneering marriages including Olive oil and mandarin, Chocolate and fois gras, his are offerings to woo even the most ardent detractor. And Macaron Day, a modern French tradition instilled by the man himself, is as good a day as any to fall firmly back on the bandwagon.

It’s also for a good cause. Here in London, the annual celebration is in its infancy- indeed, 20th March 2012 saw its first ever Macaron Day celebrated to great effect. Sugar-saturated punters dug deep to donate to Ambitious about Autism, proving unequivocably that, in the legendary words of Gordon Gecko, greed is good.

And the one donation = one macaron deal seems pretty fair. It certainly doesn’t deter me from trying eight, including the Ispahan– a raspberry, rose and lychee floozy who just wouldn’t quit. Hey, I had to try and regain the weight I lost emptying my pockets. If you’re globetrotting, there’s another chance to indulge on 20th June when Macaron Day hits Japan. Indulge guiltlessly, give generously.

To buy, visit the Pierre Herme Boutique at 13 Lowndes St, London SW1X 9EX, the concession at Selfridges, or buy online at www.pierreherme.com
To donate, or for more information on Ambitious about Autism, visit www.ambitiousaboutautism.org.uk