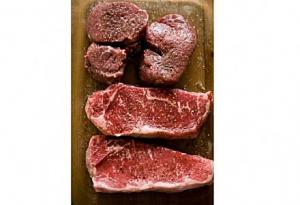 Looking for a bit of steak for a treat this weekend? You could go to the supermarket and try and guess the quality through a layer of plastic or, if you live in a posh area, go to your friendly butchers and pay a fortune for a piece of meat

Or you could do as we did and buy online from www.pampasplains.com

As the name suggests, this is beef direct from the lush pampas plains of Argentina where classic English breeds of cow were taken by early settlers and which now roam relatively freely, fattening up on some of the best pasture in the world.

Pampasplains sent us a sampler of four steaks, each in its own vacuum sealed pack to hold in the flavour and chilled down before being placed in cold polypacks. For £12.50 you get a Heart of Rump, a Fillet, a Sirloin and a Ribeye and then the decision of what to do with them.

As this was a taste test we kept it simple. Each steak was cooked for about 2 minutes a side to deliver ‘a point ‘or medium rare steaks. This was fine for all but the sirloin which was so thin it curled up like a piece of bacon almost instantly and could not be stopped from being almost well done.

We also were careful to keep our greedy paws off the steaks until they had at least three minutes resting time under foil. Steaks that aren’t rested gush blood when you slice into them and that’s valuable flavour lost. A well-rested steak re absorbs the juices and tastes much, much better.

To accompany the steaks we had McCains Chunky Cut Oven Chips which are actually very good and don’t let any chip snob tell you different. If you’ve got no time to fry, these big beauties won’t let you down, especially when liberally dusted with good Maldon rock salt.

The Heart of Rump was silky smooth and tasted much better than any piece of meat with no fat has a right to. Definitely one to use when you can’t afford any gristly bits, for example when cooking en croute.

The Sirloin, despite being over cooked showed signs of being a good cut, but only if cut a lot thicker. At this thinness it’s not really viable.

The Fillet was all fillet should be, you could cut it with a butter knife and it had just the right resistance to the tooth.

Star of the show was the Ribeye though, benefitting from both bone and fat. This was chewy in a good way, releasing lots of flavour on every bite and the bits scraped off the bone were the best of all. The fat we ate very happily.

So all in all, as we fought over the last chip, we decided that pampasplains have a lot to offer the meat eater over here – convenience and quality being the biggest draws.

Like steak and wine?Then check this out Septima & Steak menu launch

www.pamapasplains.com has a big range of meats to order, not just steaks, and orders placed before 1pm get delivered by 12 noon the following day, Tuesday to Friday. Saturdays are charged extra by size of order.