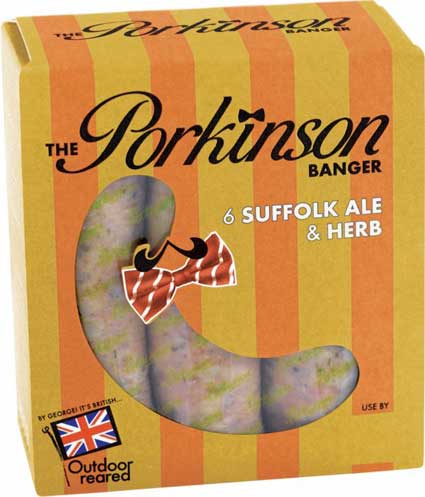 ull of flavour, dense, but not overly so, with a nice rough texture” Heston Blumenthal tries 40 sausages and declares The Porkinson Banger the best

The traditional black and white packaging is being replaced with vibrant, colourful new packs which are fashionable yet classy, as befits a sausage with The Porkinson Banger’s impeccable credentials.

The bold print, quirky bow-tie and distinctive moustache on the new packs reflect Norman Parkinson’s eccentric style as well as his passion for creating the perfect banger, a philosophy that The Porkinson Banger still hold dear today.

The new flavours use quintessentially English flavourings to complement the pork, helping to create unique but memorable bangers. The delicate combination of herbs and spices bring a modern twist to a traditional favourite.

In addition, The Porkinson Banger is re-launching the Oxford recipe as a Limited Edition banger. The lemon and nutmeg flavour will inject real zing to any barbeque and sizzling sausage dish this summer.

The Porkinson Banger is made from 80% outdoor reared lean pork shoulder and are 100% British, carefully sourced from British farmers whose pigs have roamed free with continual access to shelters.

For more information on The Porkinson Banger products visit www.porkinson.co.uk

THE HISTORY OF THE PORKINSON BANGER

During the 1950’s and 60’s, Norman Parkinson, was one of the most influential portrait and fashion photographers of his time capturing the likes of Audrey Hepburn, the Rolling Stones, Jerry Hall, and HRH The Queen Mother.

‘Parks’, as he was known by the fashion pack, lived life to the full on the island of Tobago in the Caribbean. Finding he particularly missed the great taste of the good old ‘British banger’ he applied his impeccable social credentials to food and created the perfect sausage.

‘Parks’ was so passionate about producing the perfect banger that he started keeping pigs on the hills below his house to provide sausages for his family. When word got round to the other British residents of Tobago about his mouth-watering delicacies, they encouraged him to start producing his sausages commercially. And so in 1987, The Famous Porkinson Banger was born.

Such was The Porkinson Banger’s popularity, the recipe soon found its way back to the UK, where a West London butcher introduced the sausages to London society. Within months, The Porkinson Banger had become so highly sought after by the elite that they had graced the fine food halls of Harrods and Fortnum and Mason, as well as the tables of The Ivy and Langans Brasserie. The Porkinson Banger has been served at the grandest society tables – and was also the first supersonic sausage to feature on the breakfast menu of Concorde!

Today, The Porkinson Banger continues to match Norman Parkinson’s passion for creating the perfect banger by sourcing only the best ingredients and adhering to the unique, original recipe. The Porkinson Banger is still the definitive luxury sausage and are enjoyed by gastronomic gourmets and food lovers throughout the UK.

By Foodepedia3 May 2009Food