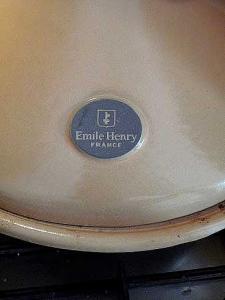 You know what a tagine is? It’s that conical lidded cookpot that many people have brought back from their holidays and then used as merely as a fruit bowl or objet d’art. It’s also a generic term for the kind of food cooked in it.

The basic cooking principle of a tagine is that the conical lid encourages the steam of the cooking to condense out onto the cooler, higher, areas of the lid and run back down into the dish. This ensures that even over long cooking times, the meat, or whatever is being cooked, won’t dry out. It also has the other advantage that the knob part at the top remains cool enough to handle even without a mitt, so it’s easy to take a peek and see how it’s all doing.

We tried the Emile Henry Tagine, which at around £60 is unlikely to be one the average-incomed North African family might buy, but you do get a very well crafted piece of ceramic ware that can easily feed six people. What is particularly good about the Emile Henrys, which come in a range of attractive earth colours, is their Fique clay manufacture. Many tagines you buy in Morocco have to be treated very carefully and most do not like being put onto a gas flame or electric hob. In fact they can quite easily shatter if you do so, putting paid to your dinner plans and making a fine old mess. Put them in the oven and you lose the whole point of the conical design, so it’s not worth it 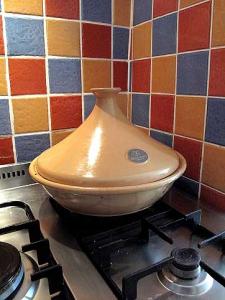 M. Henry’s tagine is designed for modern cooks however, ones with hobs. After initially preparing the tagine by boiling some milk in as advised, we immediately noticed the glaze became covered in minute hairline cracks, which made us step back worriedly. Not to worry though, this is all deliberate and part of the process of developing a well-seasoned tagine. In fact the glaze on the Emile Henry is diamond hard and can take a lot of punishment from all kinds of knives and spoons when serving the contents, as you really must, at the table

The slow cooking favours the less expensive but often more tasty bits of meat such as lamb shoulder, but the lamb we got from Allens of Mayfair, was so excellent we could probably have eaten it raw. Malcolm who served us enthused about the flavour of shoulder of lamb, even as he expertly removed the excess fat and diced the meat for us. That’s a proper butcher, knowledgeable and nothing too much trouble. He had a queue of people as usual, but everyone was prepared to wait for quality without complaining.

We cooked off the meat; you aren’t trying for a browning so don’t worry about the tedious fiddle of cooking it in small batches, just lob it all in, with ginger, garlic, onions, cinnamon, saffron and cumin. After adding a small amount of water, probably too much as it turned out, we underestimated how the tagine reuses the condensation, we popped the lid on and left it.

After forty five minutes we stirred in some brilliant harissa, not the stuff in a toothpaste tube but a pot of fresh mix that had strong heat but also some sharpness too, and dropped in some tinned chick peas, a bit of sugar, some seasoning and semi dried apricots and prunes. The sweetness of fruit goes marvellously with the lamb while the chick peas add a crunchy contrast. 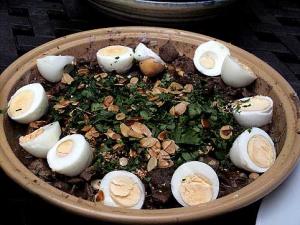 Soon after that we turned it off and let it cool. With guests in the garden six hours later, it was simple to slowly bring it back to the bubble and then add lots of fried off sesame seeds and almond flakes, a ring of halved hard-boiled eggs and lots and lots of chopped coriander and parsley.

And the final beauty of the tagine is that you then take the whole thing to table, put it in the centre and give it the Ta Da! moment by whisking off the lid to let all the cinnamon and spices waft out across the table. Then let everyone serve themselves from the center with plenty of harissa on hand to suit individual tastes. I like lots, personally.

As a simple, effective way of feeding up to eight people, the classy Emile Henry Tagine is the tops. Like a good casserole or stew there’s pretty much nothing that can go wrong with a tagine cooking session, but it scores high marks for real wow factor and a magical way with tenderising meat. It brought some real North African sunshine to a somewhat overcast South London.

Emile Henry stockists in the UK include The Original Cookware Company