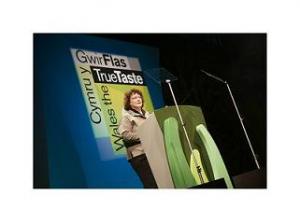 Now in its second year, the True Taste Welsh Food Market is back, bigger and better than before, bringing fresh produce from Wales’s farm gates to Londoners’ plates. The market will be held on Friday 26 February 2010 between 11am and 7pm at Golden Square, London, W1 (just off Regent’s Street).

Launched in 2009 the True Taste Welsh Food Market featured 12 producers and proved a huge success. London residents and commuters flocked to the one-day event, increasing the footfall to St Christopher’s Place (where the market was held in 2009) by 48% on the Friday of the previous week, and by 63% on the same Friday the previous year.

This year the market has moved to a larger location to allow Londoners to be able to sample and buy produce from double the number of stall holders. Golden Square in the heart of London’s West End will host up to 24 True Taste award-winning producers selling a plethora of food and drink from artisan cheeses and exquisite smoked meats and pâtés, to mouth-watering chocolate brownies and fresh fruit, vegetables and meat from local Welsh farm shops.

Whatever tantalises your taste buds, visitors to this year’s event are guaranteed to find some of the best Wales has to offer in time for St David’s Day on 1 March 2010.

For more information about this year’s event visit: www.walesthetruetaste.co.uk