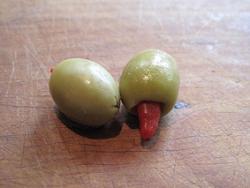 I once got searched at Madrid airport for guns, drugs, bombs, and knives etc, all the normal things that a middle-aged, clean shaven respectably dressed, Western European man is suspected of carrying, and the coppers lifted out of my onboard bag a 2kg bowling ball of cheese. ‘Oh dear, I’m in trouble now,’ I thought, but they simply put it to one side while they cheerfully stuck needles through my toothpaste tube. I felt like pointing out that a 2kg cheese would be a far better hiding place for a bomb or gun, but thought better of it. Security people don’t like backchat.

They soon gave me my cheese back and waved me off. Meanwhile my suitcase stuffed full of fine olive oil bottles continued clanking its way to the plane’s hold and I offered up my usual prayer to St Campion the Chunky that it wouldn’t come down the carousel at Heathrow trailing a wide slick of Extra Virgin.

Unearthed have made getting such fine food home a bit easier. They have chosen twenty two products from producers they have personally sought out and vetted. They like to talk to the producer, to see the farm, to meet the people and so guarantee the produce and know its back story.

Does it make the products taste any better? Well emotionally yes, knowing provenance can often skew your view. I once met an influential Swedish wine writer who refused all luxury trips to meet the makers because he felt that once he’d enjoyed their lavish hospitality he could never have an unbiased view of what was in his glass. I offered to do the hospitality bit for him, but he just laughed in that unearthly Swedish way and moved on to the films of Ingmar Bergman, as Swedes tend to do.

The Unearthed Feta, for example, we are told is barrel aged by artisans and is a traditional product with a Protected Designation of Origin status. This means that the cheese is produced exclusively using sheep and goats milk from herds that graze in the mountainous region of central Greece. As for the barrel aging, well that is supposed to add a distinctive flavour, of wood, one presumes but I couldn’t detect it. It is a superior feta though, smooth and less crumbly and salt laden compared to the regular cheese and I would have enjoyed it even without knowing its life history and visualising a craggy weather beaten old man tending his flock.

The mini cooking chorizos were very good. I tried the suggested roasting in the oven and then tossed them with some feta and green beans but even better, if not authentically Spanish, was frying them in slices with some very British black pudding, eggs, mushroom and tomatoes for my breakfast. Nice

Green olives with a chilli sticking out were tasty little fire bombs but the Manzanilla olives with Manchego cheese and chilli were subtler and went down well with some chilled fino on a Saturday afternoon.

It’s all good stuff that they’ve dug up and the Unearthed website has all the products listed and where to buy them, which perhaps unsurprisingly, is mostly Waitrose right now. It also has some excellent recipe suggestions including Chorizo Toad in the Hole, which sounds a winner.