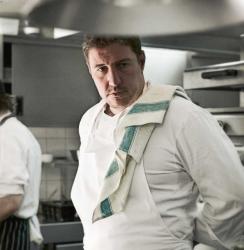 ‘I love England, I’ve been here over 20 years now, but if I ever catch myself putting vinegar on my chips then I’ll know I’ve gone native and it’s time to go home to France.!’ Claude Bosi roars with laughter and it’s lucky there’s still half an hour to go to service in two starred restaurant Hibiscus in Mayfair as the noise breaks the calm of this subtle, elegant restaurant room.

As French as Onion Soup Claude is a big man, in presence and in restaurants. A Michelin star at just 24 was an indication of just how far he would go in the culinary world and his prop-forward physique an indication of his determination. Hibiscus is of course fine dining to the max but we’re here to talk about his latest venture, a pub in Wimbledon Village called the Fox and Grapes.

First though let’s get the G word out the way ‘Agh, gastropub,’ Claude says with Gallic scorn, ‘ no you’re right I would never call it that. It’s a pub and it serves food. It’s that simple.’ The food he’s dishing up though isn’t quite ham rolls wrapped in clingfilm though is it? ‘It’s very home cooking I think,’ says Claude, ‘very different from here at Hibiscus. Things from the past, some classic bistro dishes….’ And Chicken Kiev? ‘ Ah yes! We have rescued it from the 70’s we can’t make enough it’s so popular. A Label Anglais chicken breast filled with garlic butter, coated in fresh breadcrumbs. Not difficult but delicious.’

Claude spends the majority of his time at Hibiscus, because The Fox and Grapes is a collaboration with his brother, Cedric and former sous chef at Hibiscus, Patrick Leano. Cedric previously ran Claude’s pub The Bell in Yarpole for five years whilst Patrick has been with Claude for two years and was previously with Eric Chavot at The Capital in Knightsbridge. So where did the pub dish ideas come from? ‘Simple’, explains Claude. ‘I went out and got some old English recipe books, that’s where we found things like the junket for dessert and the Prawn Cocktail. Dishes don’t need to go out of fashion, they just need to be done properly.’

But surely the Snail Lasagne, that’s not English? ‘Well the snails are,’ he grins, ‘all the way from Hereford and they are fantastic English produce.’ Other classics are also on the menu. ‘We are doing our own Pork Scratchings and a Pork Pie too. The pie has been very popular, good pork, great pastry and a jelly made with a touch of apple juice, it adds that little something extra. I understand why Pork Pies have got a bad name but that’s because they were bad! Not ours.’

‘The thing is,’ he adds, ‘ that you can’t come into work at 10:30 or 11 in the morning and hope to do good food by 12, you need to be in the kitchen early like any proper restaurant. You aren’t just doing food for the sake of it just because it’s a pub’ And what about the prices? They seem very reasonable. ‘Yes I hope so,’ he agrees. ‘We’re trying to be competitive in the area. Okay we may be a little bit more expensive than a pub in Wimbledon but this is very fresh produce, things like label Anglais chicken aren’t cheap and the kitchen starts work at seven in the morning. Of course you know I could do a steak for £9 if that’s what people wanted, but you’ll be chewing it from now until Christmas!’ 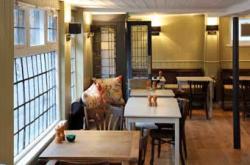 The area is of course lovely. ‘Everyone said to me it’s a fantastic spot and it is,’ he agrees. ‘I go down there after service at Hibiscus at around 11pm and it’s like being in the country, the fresh air, the clear sky. It’s wonderful.’

The purchase was on and off and then on again ever since Claude’s business partner spotted it in August 2010 . It had become a rundown place, Claude explains. ‘It was losing money as a pub, we believed we could make it profitable, as well as keep it local as pub for people who just want a drink. Even so the tables we will have to give to diners over drinkers when it’s busy.’

As well as familiar dishes, like Traditional Cumberland Sausage, English Brown Ale Battered Hake and Triple Cooked Chips with mushy peas, Irish Eel, Ham Hock & English Apple Jelly with watercress salad there is coq au vin and tripe. Tripe? ‘Oh yes we are selling tripe quite strongly, it’s ox tripe and it’s good food. It’s hard work to prepare and cook properly – wash, soak, wash, cook for a day etc – but it’s cheap produce you can do a lot with. It’s like pighead, cheap to buy but a lot of work to make delicious and worth the time and effort.’

And of course being a pub there is Sunday Lunch. Claude leans forward excitedly . ‘I love Sunday lunch, we do ribs for two and meals for groups. Roasts are great. I love that thing of sharing. And with a glass of beer too.’

‘You know maybe I am actually becoming too British, ‘ he reflects happily as I prepare to leave. ‘I prefer my beer in those glasses with a handle. So we bought some for the pub. Those straight glasses are no good at all, too easy to drop!’ He mimes a glass sliding through his hand.

Well if he is becoming too British it’s our gain. Let’s hope he never gets to the point when he puts that vinegar on his chips because we don’t want to lose cooking like Claude’s.

We review the Fox & Grapes here.