Down in Greenwich, a husband and wife team are flying the flag for Jawbreakers, Rhubarb and Custard, Poor Bens and over four hundred other sweets. We went to meet Mr and Mrs Humbug. 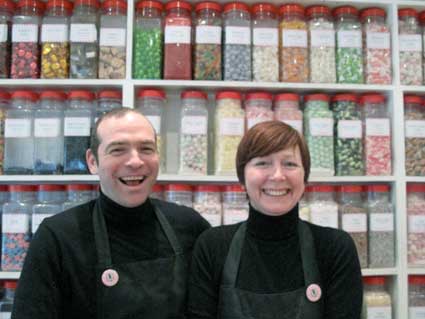 ”It’s such a great job. You see grown men come in here; rough tough types and they just regress. They’re jumping up and down with excitement like they’re kids again.” Mr and Mrs Humbug, aka David Fireman and his wife Angela, are talking about the joys of running their traditional sweet shop in Greenwich. And I do see what they mean, almost within minutes of getting inside I am hooked too, forgetting the interview and excitedly asking if they have a particular sweet that I remember from my own childhood and, the thing is, they always do!

‘Well we have over five hundred jars of sweets in here,’ says Dave indicating with a wave of his arm the colourful walls behind him at their shop in Greenwich Market. ‘We even stock things that aren’t all that popular because we like to think we can always serve customers with that unique sweet they want.’ 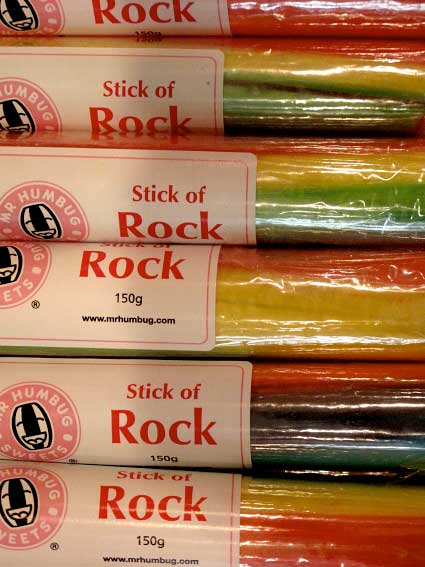 They didn’t always run a sweetshop though, they initially both had successful careers in an advertising agency where they met, but Dave admits he has sugar in his blood. ‘My parents ran a sweet shop, in fact they still do up in Norfolk, and I just got tired of the advertising world and rather like the Mafia, the sweet business pulled me back in!’

So with parents running a sweet shop he must have been the most popular boy in school? ‘Well maybe, but it gave me spots!’ What about his teeth? Destroyed at an early age I assume. ‘No,’ laughs Angela, ‘in fact I’m the one with all the fillings.’ Dave agrees, ‘Yes it’s true. But you know my parents were well aware of the dangers and cleaning our teeth was properly policed,’

‘We didn’t just rush in to setting up a sweetshop,’ Dave explains as he gets into the black apron he and Angie both wear to makes the sweets stand out, ‘ the thing is that the surviving traditional sweet shops tend to be in coastal town or picturesque places, there isn’t much point in setting up just anywhere. I felt I knew the nuts and bolts of the business no problem, but location was key.’

It is of course true that you’re unlikely to find many sweets in a corner shop now especially not sold from the jar. Dave sees the reasons for that quite clearly, ‘Some corner shops used to have about sixty jars but the fact is that the space required isn’t worth the margins involved, they can make more money from cigarettes and drink.’ 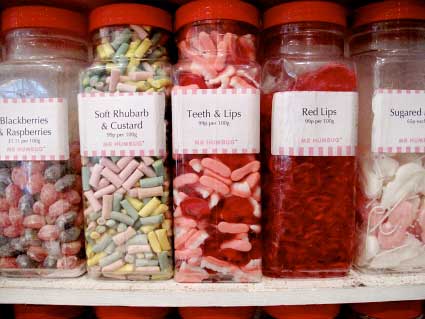 ‘And it’s labour intensive,’ adds Angela,’ some of those jars weigh a stone and lifting those up and down all day is hard work.’ That work is also one of the reasons that they only sell the sweets in minimum quantities of about 3oz. ‘We can’t do a served pick n mix’ Dave says,’ we already have to run to keep up with demand on the weekend. Yes self-serve pick n mix can be found around, but do you really want to get your sweets from somewhere where people’s hands have been all over?’ I see his point; here the sweets come tumbling fresh from the jar into to the scales and then to the crisp paper bags. ‘People tend to buy four to five different bags, normally their favourites, so that’s cost effective.’ 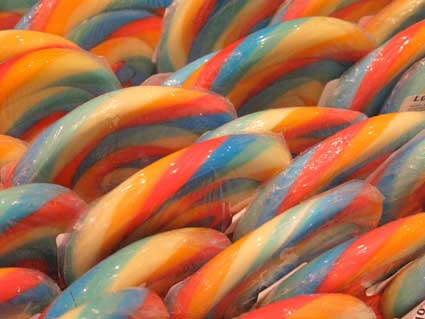 Looking at the massed jars, the names jump out at you. Some old friends, some completely new. Here there are the sherbet lemons I used to love so much but which used to lacerate the roof of my mouth, and flying saucers and foam shrimps and rhubarb and custard and black jacks and and…..’These are all genuine, not rubbish imitations,’ Dave points out proudly ‘when you eat our sweets you get the full experience you want to remember not a watered down or changed one.’ And, as they explain, many sweets here are unique to areas and even countries. ‘Take the Dutch Triple Salt,’ he says, ‘or the Belgian Zouts or the Swedish Salty Fish, they aren’t the norm for the English but the expats love them, just love them and come here specially. Then we have things like Clove Rock, which is pretty much unheard of outside of Ireland, but we have one Irishman who comes in regularly for his supply. Uncle Joe’s Mintballs? They from around Blackpool and people from up north are always delighted to find we have them here.’ 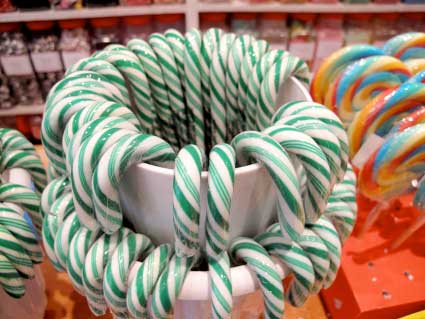 He gives us a Supersour Apple, which is incredible. My face implodes with the incredible sourness, which is almost impossible to stand. ‘Ride it out,’ advises Dave, ‘it’s just the coating, it will become sweet soon’. They have plans to start a facebook page so that people can upload videos of their friends trying a Supersour for the first time. Later I handed samples of these out around the office and the effect was indeed very funny with some people just unable to take it and others pulling the most ridiculous faces.

For a traditional sweetshop, they are well clued up to the value of the Internet to their business with mail order via www.mrhumbug.com doing great business. It’s organised by categories, by name and even by occasions like weddings, with Mr Humbug ladies favours, table centrepieces or gift boxes. Browsing the site is almost as enjoyable as being in the shop as old names appear on screen to tempt you to ‘pick and click’ as the slogan has it. They also pay attention to worries on obesity and diabetes with a very large range of sugar free sweets too.

‘We’re a bit of an apothecary too,’ Angela points out. ‘The actors in Greenwich Theatre come in for Jakemans Throat and Chest Sweets because they help clear congestion and help them project their voices better. We always know when there’s a first night because they are all in here queuing up, All the members of the cast that are new to Greenwich get the word from other cast members to get around to Mr Humbug. Even English National Opera have been in!’ 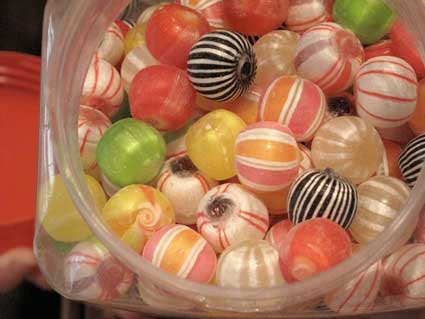 So what jar do the Humbugs find themselves personally returning to time and time again? ‘Chocolate Brazils for me,’ says Dave busy sniffing some serious clove sweets he is stacking on the shelf. ‘Chocolate raisings are my favourite,’ says Angela weighing me up a bag of sherbet lemons and a massive 3-inch diameter Jawbreaker.

With doom and gloom all around a good old sweet is the perfect pick me up. Dave and Angela are the happiest shopkeepers I have ever seen, clearly loving the job and the joy of making people happy. If you’re yearning for a little taste of the past, when your biggest worry was getting a bike for Christmas, then you should see Mr Humbug for a flavour of what you’ve been missing all these years,