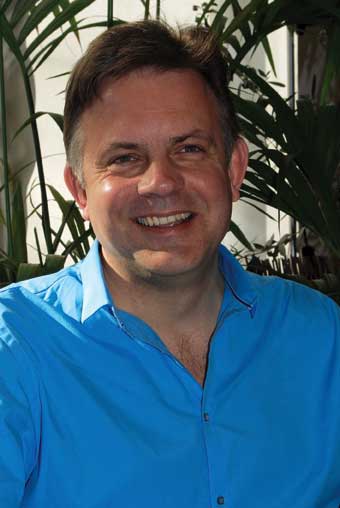 Are you disheartened by Tesco’s recently announced £3.1billion profits?
On one hand, amidst one of the deepest recessions in years, this announcement represents a blazing success story. But on the other, it’s nauseating. I’d like to ask, how are they achieving their margins? And at whose expense? Certainly not the retailer!

The supermarkets will tell you that they give you what you want, but that’s just a clever marketing ploy. They have insidiously eroded our choice over the past 50 years with the notion of convenience. The reality is that supermarkets often peddle foods laden with poor quality ingredients to which the body has little resistance, giving a short-term sugar spike and a long-term prescription of health problems, like diabetes.

Dispel a food myth…
Despite being told the opposite for over half a century, fat isn’t bad. There is no evidence linking dietary intake of saturated fats with heart disease. It’s actually the triglycerides released by excess carbohydrate intake that fuel heart disease. Look at the population of the United States who grow ever fatter despite embracing a low fat culture.

What food should we be paying more attention to?
Unpasteurised milk from carefully tended cattle. It’s flavoursome and full of essential enzymes and good bacteria including healthy strains of E-Coli. Pasteurisation / homogenisation has become a convenient way of processing the pathogens out of milk from intensively farmed animals. Mothers’ breast milk isn’t pasteurised and helps us build-up a resistance. We’re getting so far from nature that if someone invented a time machine, a traveller from now going back 100 years would be dead within the hour due to their weakened immune system.

It sounds like we’re approaching a catastrophe…
Well, we’re not producing enough food in the U.K. Come crisis, other countries will favour their own before sharing crops with us. In that sense, the free market is unsustainable. And the average age of a U.K. farmer is high at 56.

My, this is depressing
But do we enjoy this lifestyle? It doesn’t seem to make us happy. I think we’re probably going to be forced to live differently ultimately – and it’s a positive step to think about it now.

Who are your food heroes, past and present?
Past: Brillat-Savarin, who said that a nation could be defined by its diet, hence ‘Ros Bouefs’, although I don’t understand why that’s derogatory.

Present: I admire Michael Pollan, a brave U.S. journalist writing in the tread of Eric Schlosser (‘Fast Food Nation’). In his latest book, ‘In Defence of Food: An Eater’s Manifesto’, he summarises healthy eating in seven words – ‘eat food, not too much, mostly plants…’

I also found myself pathetically awe-struck by Jamie Oliver recently.

Describe your most impressive restaurant experience
Whilst frighteningly expensive, the tasting menu at Shane Osborn’s ‘Pied à Terre’ is unbeatable for a special occasion. The agile, intelligent wine matches took the meal to another level: the sum was greater than parts. I really admire Allegra Kennedy’s ‘Leon’ for its creative but economical menus and stylish marketing.

What is the future of food journalism?
The written word has the power to achieve so much – sometimes more than the spoken word. Whilst the proliferation of the media means that people with passion are able to write and attract a sometimes huge following on places like ‘Foodepedia’, it must be desperately concerning from a journalists point of view that it’s becoming ever harder to earn a living from it.

Did you know that until the late 18th century, gastronomy was seen as a sin in this country, condemned by the Puritans?
I suppose it was the privilege of the rich. We’ve certainly had a strange history of food. We started the industrial revolution, denuding our food culture in the process. It is a revealing irony that the best British producers have such a good reputation abroad now. Just look at the respect that our cheese attracts.

How did you celebrate at the end of last year’s festival?
With a sense of euphoria, Clodagh McKenna, Olly Rose and at least a dozen others had a spontaneous feast in the pressroom with the left over produce. Soon afterwards we checked into a nearby pub, eventually ending up in someone’s hotel room, all the time trailing a cart of the ever-diminishing ingredients with us. I must have stumbled home at 3am. I anticipate that this year will be more muted – I have to start work on the Bristol organic food festival almost straight away.

Who, within the anticipated 25,000 visitors, are you expecting to come to the festival?
Foodies. Last year the fairly affluent dominated, although I would prefer to see a fuller spectrum. I want to democratise good food and make it clear that it’s possible to eat well even on a tense budget. For example, one of our partners, ‘love food, hate waste’ revealed that we throw away one third of what we buy. In that sense, if we were more careful, we could afford to spend that third more on better food.

What advice would you give visitors?
This year’s festival is about discovery. Last year we organised producers in categories, although this time we’ve made it more erratic – you will stumble across amazing surprises.
Have a look at the show’s guide online (www.realfoodfestival.co.uk). Make sure you make time for the chef demonstrations, which include Giorgio Locatelli, Thomasina Miers and Fergus Henderson as well as Barny Haughton’s hands-on cookery school. You can hear the latest thinking at the debates chaired by Zac Goldsmith, Joanna Blythman and Henrietta Green.

What interested you in food?
Whilst I’ve worked in the food events business for years (Taste London and La Dolce Vita), it was the Slow Food festival in Turin which really inspired me. 180,000 food and information hungry visitors turned out to meet over 1,000 exhibitors. That’s what caused me to put my own money into the Real Food Festival. My philosophy is to support our producers, who are actually subsidised to come. Instead of a mean eyed focus on the bottom line, I want to expose people to the pleasure and joy of good food. I don’t understand people who claim to be blasé about food – food as fuel. You can live forever without a plasma television, but only days without food!

What is there for the children?
They come for free! There will be a docile water buffalo to sit on, pigs, chickens, wormeries, seed planting, a roof full of sheep and even a cow to milk.

Do you have a guilty gastronomic pleasure?
I’m ashamed to admit that I used to crave Ginsters pasties – there was something comforting in their stodge and starchiness.

Can you leave us with a Jerry Springer-esque ‘Final Thought’?
The show is for life, not just the weekend. There are 500 producers keen to share the pleasure of genuinely real food. That’s 500 alternatives to the supermarkets. I hope visitors will feel empowered to expand their culinary horizons.

Like our most prominent supporter, Raymond Blanc said, eating is a political act, and also a very intimate one. Our purchasing decisions have a huge impact on our world. But I want to stress that by eating nutritionally dense food we will inevitably be buying into an ethical, sustainable lifestyle eventually.