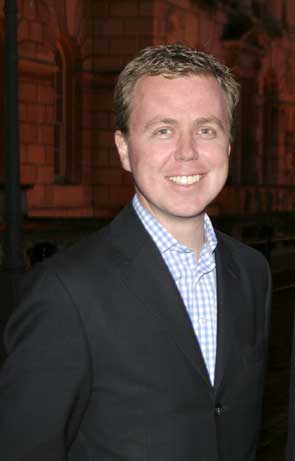 Originally trained as a chef, Robin Bidgood has worked his way to become head of Tate Catering, overseeing gallery eateries at Tate Modern, Tate Britain, Tate Liverpool, Tate St Ives and the The Footstool restaurant, St John’s, Smith Square. Born in Hampshire, he saw off 2000 people to win a Savoy scholarship and since worked with luminaries Giorgio Locatelli and Anton Mossiman.

Win Tea for Two at the Tate. Here

What was your childhood dream?
To work at The Savoy. I met a 60 year-old gentleman who like his father and grandfather, had worked through the ranks, from bellboy to housekeeper. At age 19 I beat off 2000 to secure a space, soon becoming head waiter.

What is the wildest thing you’ve done to feed a craving?
When I was 18 I spent six months in the five star Hotel Lancaster, Paris. A customer ordered Champagne dotted with tiny ‘fraises de bois’. I couldn’t resist illicitly trying one. The result was an eruption of flavour, which I remember vividly. Two years later I saw a rare rosette of berries buried in a hedgerow. Despite wearing shorts, I climbed in, scratching myself in the desire to recreate that cocktail – but just for me this time.

Who is the best restaurant critic?
That depends what you are looking for. Matthew Fort was good at keeping the industry on its toes. I think it helped that he was first a forager and a cook. His critiques were always constructive and food focussed. A.A. Gill makes me laugh.

What do you cook at home?
Simple dishes, easily shared, like braised shoulder of lamb followed by a cheeseboard. At home as at work, I try to restrict the dish to four components.

Who are your idols?
Richard Corrigan and Fergus Henderson both make really edible food and have stuck to their principles. And Giorgio Locatelli for his slow cooked, flaked oxtail and sage ravioli. Whilst I tasted that dish 15 years ago at a charity auction, the memory is still appetisingly fresh…

How does Tate’s menu vary across the galleries?
Whilst I hate the phrase middle England, Tate Britain does attract more mature people from the shires, particularly with important exhibitions like the Van Dyck (until 17 May). Tate Modern receives a younger crowd, and lots of tourists. Whilst you will find the same crockery, cutlery, loose leaf tea and further than fair-trade coffee across all galleries, there are some curious facts. For example we serve over 45,000 portions of fish and chips a year at ‘Level 7’. Sightseers are fascinated by the very British combination.

How do you choose suppliers?
From smoked eel to whole lambs and Rhug estate venison, it is a question of blind tasting, sustainable farming and ethical sourcing.

And people?
We are the only galleries with our own catering company, so we recruit direct which maintains quality. Our pastry chef, for example, did time with Marco Pierre White.

How are diners reacting to the credit crunch?
It is survival of the fittest. People are eating out less and becoming ever more selective. London diners are particularly fickle. I like to think that we have one of the most interesting and reasonable wine lists in the country, though, particularly at ‘Rex Whistler’, which is of great interest to our customers.

And how are you reacting?
Our sommelier offers lots by the glass and carafe. We are serving some very tempting set lunches, too. And providing their parents eat a main course and dessert from the a la carte, children eat for free at Tate Britain.

Do you take work on holiday?
I cannot resist markets, which reveal a city’s soul. My favourite is Sydney’s fish market which auctions over 100 species daily. Taste can be so distracting! I remember stopping by in a bar in Madrid. The tapas were so good that we cancelled dinner and stayed all night, grazing on freshly made morsels, sipping beer and watching football with the owner.

What has been your biggest coup?
Staging an eight course banquet for 2,500 in Tate Modern’s Turbine Hall, which slopes. I worked with Skye Gyngell, Head Chef of Petersham Nurseries, Richmond. The theme was spring and we decorated the hall with real cherry trees in blossom.

What are your favourite restaurants?
In London, I love Mr. Kong’s, China Town – great for soft shell crabs. The buzz of Soho’s Bocco di Lupo is unmatchable too. My favourite restaurant in Europe has to be the more relaxed sibling to ‘Il Ciprio’ in Florence, where it’s open house.

What would Tate Catering’s motto be?
Never elitist and driven by reliability.