Most of us all have experienced the nouvelle cuisine from France, the tapas style eating from Spain, the alfresco and the pasta from Italy… what about Portugal? What is its gastronomic USP? Apart from a simple yet extremely varied cuisine, produce of 13 very different provinces, for me, what is undoubtedly special about our gastronomy are our desserts.

The egg filled creations which are the signature dishes of family meals, special restaurant gatherings are also found on a daily basis in the form of smaller pastries in coffee shops to be consumed with the ubiquitous espresso. The origins of our desserts go back to the monasteries of the XVI century, when the egg whites were used for the production of the host, to stiffen the nun’s habits when ironed and to clarify wine during production. In order not to waste the yolks, and with the sugar provenient from the World travels, the nuns and priests developed recipes that were rich in egg yolks, almonds, dry fruits and citrus.

These ancestral recipes were confined to the monasteries but gradually left their enclosed walls and slowly, with the centuries, became part of the recipe book of mothers who told their daughters (in my case, their son!) and transformed themselves into regional specialities of each province. Today I present you with a rich almond cake from the Convent of Vidigueira, in Alentejo. I introduced two things that make the cake stand out and taste even nicer: some sheets of filo pastry on top which add extra texture and a honey-orange blossom syrup which give extra scent and moistness. 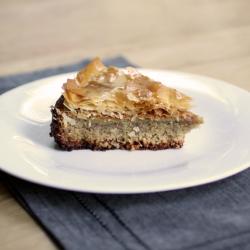 12 eggs (I know not good for those with high cholesterol but..hey!)
200 gr of ground almonds
100 gr of sugar
1 tsp of cinammon powder
1 tbsp of Portuguese firewater (aguardente) –
use Italian Grappa if you cannot fin d it
8 circular sheets of filo (each with roughly a 23cm diameter)
Butter to brush

Separate the eggs yolks from the whites in two bowls. Whisk the egg whites into stiff peaks. Set aside. Beat the yolks with the sugar till it resemble a smooth paste, add in the almonds, the firewater and the cinnamon powder. With a metal spoon, fold in the egg whites.

Butter and dust with flour a cake tin of no more than 23cm of diameter. Transfer the cake mix into the cake tin. Place on top the sheets of filo, each one brushed with butter. Take the cake tin into the oven and bake from 35 minutes. With the edge of a knife test if the cake is baked. The knife should come out dry when the cake is ready.

Place all ingredients for the syrup into a small pan and let them simmer slowly for 10- 15 minutes. Remove from the heat and set aside to cool down completely.

Drizzle the syrup on top of the cake and serve.