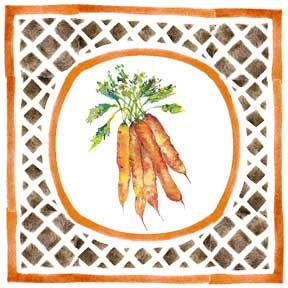 When I was seven, I liked to eat carrots with vinegar. I peeled the carrot and dipped it into a small glass of vinegar between each bite. When the carrot was gone, I drank the vinegar. I thought it was wonderful. My sister thought I was out of my mind.

My interest in carrots may have been sparked by my desire to be able to read in the dark. I had learned from my mother that carrots were a rich source of carotene, also known as vitamin A, the vitamin that improves night vision. She was living in London, spending nights in the underground, during the Battle of Britain. One night, while waiting for the all-clear siren to sound, she was told that the common carrot would help the Allies win the war. This is the story that she often served with boiled carrots: ‘In an attempt to mislead the Germans about their radar capabilities, the Royal Air Force circulated a story that British pilots were able to see in the dark because they ate enormous quantities of carrots. That is why many Britons, anxious to improve their night vision because of the wartime blackouts, grew and ate so many carrots.”

Before I went to Sicily, I thought of tomatoes, peppers, aubergine, artichokes and mushrooms as Italian vegetables. Carrots were the wrong color for my red, white and green Italian palette. But, since my daily trips to the market, I have changed my mind. The carrots in the market were freshly pulled, sweet and crisp with attached greens that attested to their freshness. Carrots are no longer merely supporting players, edible utensils used to transport tasty bites from bowl to mouth. They shine as the primary ingredient in appetizers, soups and salads. I used carrots, honey and mint to make a salad that I served with baked salmon. Here’s how I did it:

I mixed together equal parts of fresh lemon juice, orange juice and olive oil, about a tablespoon of each, and a teaspoon of honey in a serving bowl. I scrubbed a couple of carrots with a vegetable brush, cut them into thin slices and added them to the dressing along with the leaves from a couple of stems of mint cut into fine ribbons, a bit of lemon zest, salt and pepper.

I made this salad an hour before dinner so that the mint would infuse the dressing and the carrots would wilt a bit.

Although it has been sunny, Saturday was a cold rainy day. I got cold and wet on a short walk and wanted something to eat, something warm and comforting. Soup! I had carrots and tomatoes so I made tomato and carrot soup. Here’s how I did it:

I heated a tablespoon each of butter and olive oil in a pan and added three large spring onions and six medium carrots cut into two centimeter slices, and one clove of minced garlic. When the onions were soft, I added eight small cored and quartered plum tomatoes. I reduced the heat, added salt and pepper and cooked the vegetables for ten minutes more before I added a liter of water. I continued to cook the soup until the carrots where soft and the tomatoes had fallen apart. I added three heaping tablespoons of fresh ricotta cheese when I pureed the soup with a blender. Topped with a handful of flat leaf parsley and served with toasted bread from the corner store, dinner was cozy even though the wind roared.

We had been invited to a gathering on Sunday afternoon and I roasted the last of the carrots as a base for a hearty carrot spread served with bread to take to share. I haven’t figured out what to call it but it was delicious. Here’s how I did it:

I cut eight carrots in half lengthwise, put the pieces into a shallow baking pan, poured on a couple of tablespoons of olive oil and roasted them in a 175 degree oven until they were tender and had begun to caramelize, about 40 minutes.

I used a food processor to whiz the carrots to form a coarse puree and saved the puddle of golden carotene rich olive oil in the bottom of the roasting pan. I added salt and pepper to taste and spread the carrots in the bottom of a shallow bowl, added a layer of drained, fresh ricotta, a generous layer of shredded mint leaves, a handful of freshly toasted pine nuts, and then poured the reserved olive oil on top. A small knife made it easy to spread the carrot mixture onto pieces of toasted bread.

If you have a better idea for a name, please let me know.